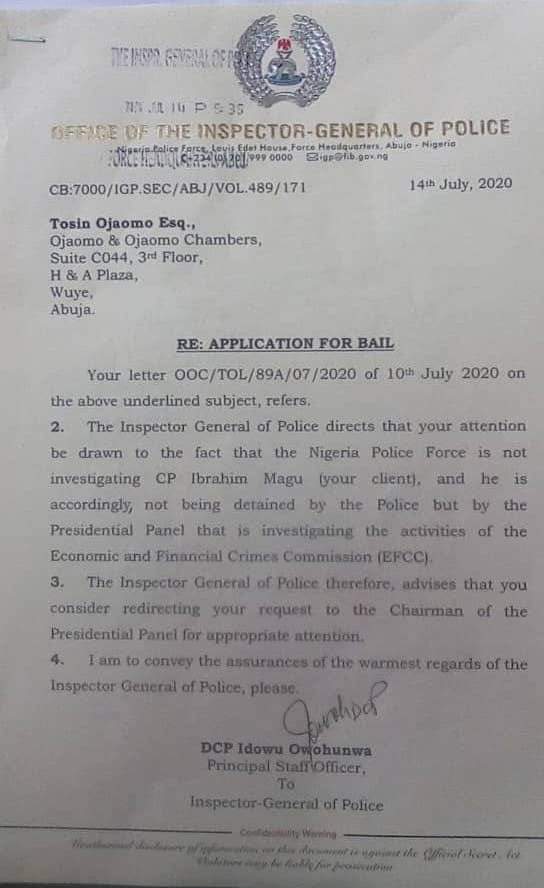 Ibrahim Magu, suspended chairman of the Economic and Financial Crimes Commission (EFCC), says he has not appeared before by the Presidential Committee on Audit of Recovered Assets (PCARA) for days.

He said he last appeared before the panel about a week ago.

Wahab Shittu, counsel to Magu, disclosed the concern of his client in a letter written and submitted to the panel on Wednesday.

Magu was arrested on July 6 over allegations of failure to properly account for loot recovered under his watch between May 2015 and May 2020.

He was later moved to Area 10, force criminal investigation department (FCID) in Abuja, where he has spent the night since his arrest.

According to Shittu, his client has not been brought before the panel between Thursday and Tuesday, and has instead arrived at the venue on the listed days only to wait from 9am to 9pm before being taken back into custody.

He said the clarification became necessary after it was reported that Magu was grilled by the panel on Monday.

“The allegation that our client was grilled by the Panel on Monday, 13th July, 2020, as reported above is complete falsehood,” the letter read.

Shittu said the suspended EFCC boss was yet to officially receive a copy of the allegations against him and requested the panel to ask the inspector-general of police to release him from custody to enable him to prepare properly for his defense.

Magu also requested to be released so that he could attend to his health.

“Our client observes that rather being afforded copies of the allegations against him, some of these allegations are flying around on social media platforms with prejudicial consequences.

“Our client requests that these allegations be formally served on him to enable him to respond to the same immediately.

“Our client observes that the Panel has issued an official statement to the effect that it did not authorize the detention of our client. We request the Panel to recommend to the Inspector General of Police in whose custody our client is to release him from custody to enable him adequately prepare his defense and attend to his failing health. We plead with the authorities to release our client from custody.”

The lawyer also denied all allegations against Magu, including the said attempt to “spirit” him away from custody, adding that the charges are “trumped-up allegations designed to tarnish his image and rubbish the credibility and image of EFCC which has been stellar and outstanding under our client’s watch”.