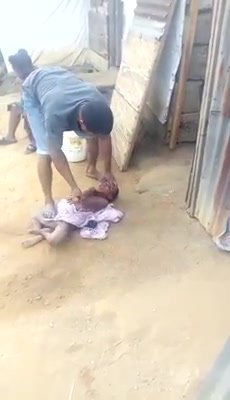 …Also charged for physically abusing the little born by another mother.

An abusive 30 years old father of two, Francis Silas, who was caught on camera that went viral forcefully feeding his about 5 years old daughter wailing little Happiness her own feaces has been remanded to Correctional Custody in Port Harcourt.

Francis Silas was remanded in Port Harcourt Correctional facility after arguments for his bail failed before Chief Magistrate John Enyindah.

Magistrate Enyindah adjourned the matter to 14th January after arguments to amend the charges preferred against the suspect failed to scale through.

The suspect who hails from Akwa-Ibom State was arrested by the Police in Rivers State on the 30th of December 2019 after the video showing him forcing his daughter went viral on social media.

Our correspondent reports that Francis Silas who is facing three defective count charges was also accused of physically assaulting his daughter from another mother.

Though Lawyers to the accused E.E Essien had asked for bail for her client arguing that the prosecution cannot appropriate and re-appropriate at the same time. She asked the court to discountenance the application for amendment of charges and go on with the charge preferred against her client.

But FIDA Lawyers opposed her bail application insisting that the suspect was not properly charged according to relevant laws of the federation and prayed for his Lordship to grant them some few hours to meet with the Prosecuting Counsel to come up with the appropriate charged was declined by the court due to the magnitude of the case.

Magistrate Enyindah after hearing all the arguments adjourned the matter.