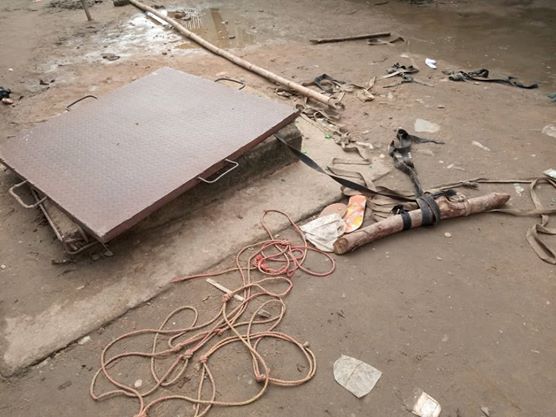 …Cry for Justice in Port Harcourt

… Paramount ruler bans use of all Wells in the community

About four persons have been nabbed by the Police in Port Harcourt, the Rivers State capital, as the family of a Lady whose daughter was assassinated with hands and legs tied and dumped in a Well in Rumuosi Community in Obio-Akpor local government area, in (a suburb) of Port Harcourt calls for justice.

The mother of the deceased, the Late Miss Charity Ohaka, Mrs Evelyn Ohaka is tearfully demanding for justice from the security agencies and government.

The traumatized mother lamented that the late Charity Ohaka, 34 years old was her first daughter.

She described as curious a situation where the compound where her apartment was broken into and killed had her hands and legs tied with a block around her waist before dumping it inside a Well is “about Seven metres away from the office of Local vigilante known as OSPAC, Security, Planning and Advisory Committee (OSPAC) in Community. We leave every investigations in hands of government and security agencies.”

The recovery of her body led to rampage by angry youths leading to the destruction of cars and looting of shops of goods worth millions of Naira.

It will be recalled that one Miss Charity Ohaka, 34 years old and first daughter of Ohaka family from Okporowo Ogbakiri in Emuoha local government area of Rivers State who lives in Rumuosi  was sometime on Friday, last week, reportedly kidnapped from her One room  apartment until her fast decomposing body was discovered in a Well on Sunday.

The foul odour oozing out from Well was observed by people who drew water from it noticed oily substances coming out of the well. Arousing suspicion, so residents in area contacted the local vigilantes who informed the Police.

With the efforts of the local vigilantes and volunteers, the fast decomposing body of a lady later identified as late Miss Charity Ohaka, said to hail from Okporowo-Ogbakiri in Emohua local government area was recovered with supervision of the Police.

Her neighbours said, she lives on the proceeds from the interests she makes from the money lending business popularly known as “Akawo” in the local palace.

ALSO READ: Is it now cool to kill?– An anguished letter to Nigerian Lawmakers

An Eyewitness told our Correspondent that after her assailants broke into her apartment through the ceilings, she was killed, tied hands and legs with heavy block around her waist and thrown into the Well close to her house.

The recovery of her body in presence of youths from Okporowo Ogbakiri sparked off spontaneous angry reactions leading to the vandalization of cars of motorists, shops and massive looting of money and goods from shop owners.

It took the intervention of the Police and local vigilantes to restore normalcy.

Mr. Ahinike Akanni, the Chairman, Rumuosi Community Development Committee, CDC, assured that the community will work with the Police to ensure that those behind the killing of the lady and dumping her body in a well are fished out and brought to justice.

Akanni confirmed that as at yesterday, Sunday, two persons had been arrested. He said, however, that the community was interested in finding out the immediate and remote cause of her death.

“So far, the occupants of the compound where she lived have deserted the place. However, the Police have arrested two men. One of them, her boyfriend and a neighbour. The house and Well have been cordoned off by the Police as accident scenes.”

Sequel to the pollution of the Well with the dumping of the slain Lady, Eze John Chibuzor Owhortee, Nyewe Eli Rumuosi, the Paramount ruler of Rumuosi, has ordered the closure of all the open and closed Wells in Rumuosi community. He said by the pollution of one Well it is assumed all other Wells had been polluted and  it is an abomination to further use the Wells as source of water.

At time of filing this report, the Rivers State Police Command had not reacted to killing of the late Charity Ohaka.