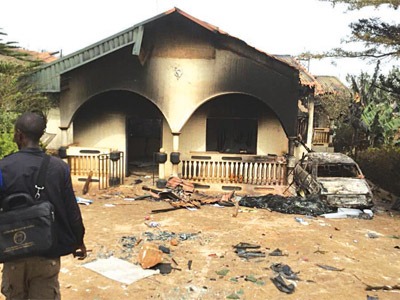 The spate of insecurity in the South eastern part of Nigeria recently affected the peaceful rural community of Umudi, Amichi in Nnewi Local Government Area of Anambra State that came under attack by unknown gunmen on 25th of June, 2021. On the fateful day, the unknown gunmen were said to have entered the sleepy community and began shooting sporadically which resulted in the burning of most hamlets and resulting in the death of a villager.

Our reporter gathered that with the life-threatening shooting majority of the residents all fled from the community and are now refugees scattered in neighbouring communities for fear of their lives. The unknown gunmen in defiance of existing security network wrote an unsigned Letter to the community and was by the family of George Aniagboso, an Ibo and Christian who was living with his father Mazi Benjamin a serving Pastor of a local church in the community.

This incident coupled with Letter of threat of the lives of George Aniagboso and his family resulted in his father preaching against increasing state of violence across the land. Not long after, they got another Letter of Threat. In the Letter it was gathered that the writer promised to wipe out the entire family of George Aniagboso. This reporter was informed that the threat Letters were most likely as a result of George’s openly vocal stand in support of the Indigenous People of Biafra, IPOB, a group pushing for self Determination and for a separate state. Instead the group was outlawed by the Government of the Federal Republic of Nigeria. Surprisingly, just three days after the second threat Letter, it was late in the night that the George Aniagboso’s family abode was raided by the armed men who severally opened gun shots which resulted in the death of a resident known as Anayochukwu. Eye witness reports from the incident said that the attackers demolished houses and other buildings with heavy sporadic shootings for several minutes lasting up to hours of rage. But for the family of George they were lucky to have escaped on the fateful day, as himself, his father and sisters had gone to visit a sick relation at another community when the invaders struck. They almost certainly would have been killed.

However, when the news got to them via other community dwellers, the family members took to their heels. Some of the rural dwellers were   believed to have left the country for safer climes.

For now, several months after, many homes remain uninhabited in the villages. Checks have also shown that even those who wished to return home dare not do so for fear of being attacked and possibly killed. As the Aniagboso family and the rest of the families remain in enforced exile, life remains horrible with absolute hunger and deprivation from returning to their farmlands where they were able to eke out a living on subsistence farm products. Only time will tell when those people will return safely to their once peaceful homes as they are refugees in various localities.