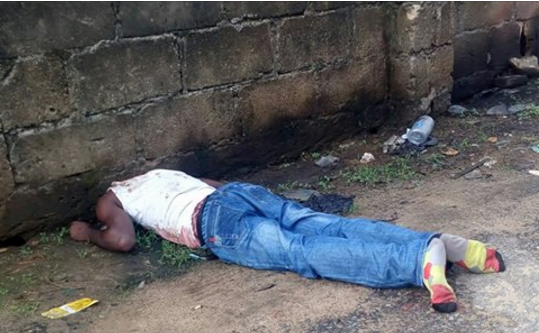 …Forces wife at gunpoint to watch, carry severed head in a bowl.

…head later displayed in front of the gate of community primary school.

Residents of Rumuekini have been thrown into mourning as unknown gunmen, at about 10 pm on Wednesday May 23, shot dead a man in Rumuekini community in Obio-Akpor local government area of Rivers State, beheaded him.

According to deceased wife, her husband’s head was cut off with the kitchen knife they compelled his wife to fetch from her kitchen and forced her to carry the husband’s head in a bowl before taking the head away.

The horrified wife of the victim, Bisi narrated that after her husband, Chima was shot dead in her presence, she was forced on gunpoint to fetch her kitchen knife, which they used in beheading him.

The traumatized wife said after they beheaded her husband, she was further forced to carry the husband’s head in a bowl, which she was forced to provide them before they took the head away.

According to the devastated wife, Bisi, “My husband and his sister, Ogechi, were in the parlour when we had the sound of a gun. I was startled. As I made my way to another room in fright, I saw the lifeless body of my husband. They barked at me that if I make any move to escape, I will be shot dead too. They asked me to bring kitchen knife for them. Which I did. They also asked me to bring a bowl, but I brought a bucket. They took time in my presence, severed the head from the body and forced me to carry the head and put it inside the bucket. They then carried away the head.” She narrated in tears.

The brother of the victim, Collins Echenumo, said the head of his brother was later discovered where it was displayed on a table in front of the community primary school.

He said his late brother was 42 years old and he had two children. “My brother had two children. His first wife is late. Before I came here I saw his body lying here without the head. We went out in search and later found the head at the gate of the community primary school in Rumuekini and brought his head back.”

It was not clear if the deceased belonged to any cult that may have warranted the deadly snuffed out life in most gruesome manner.

Rivers state Police Command was yet to react to the gory incident.