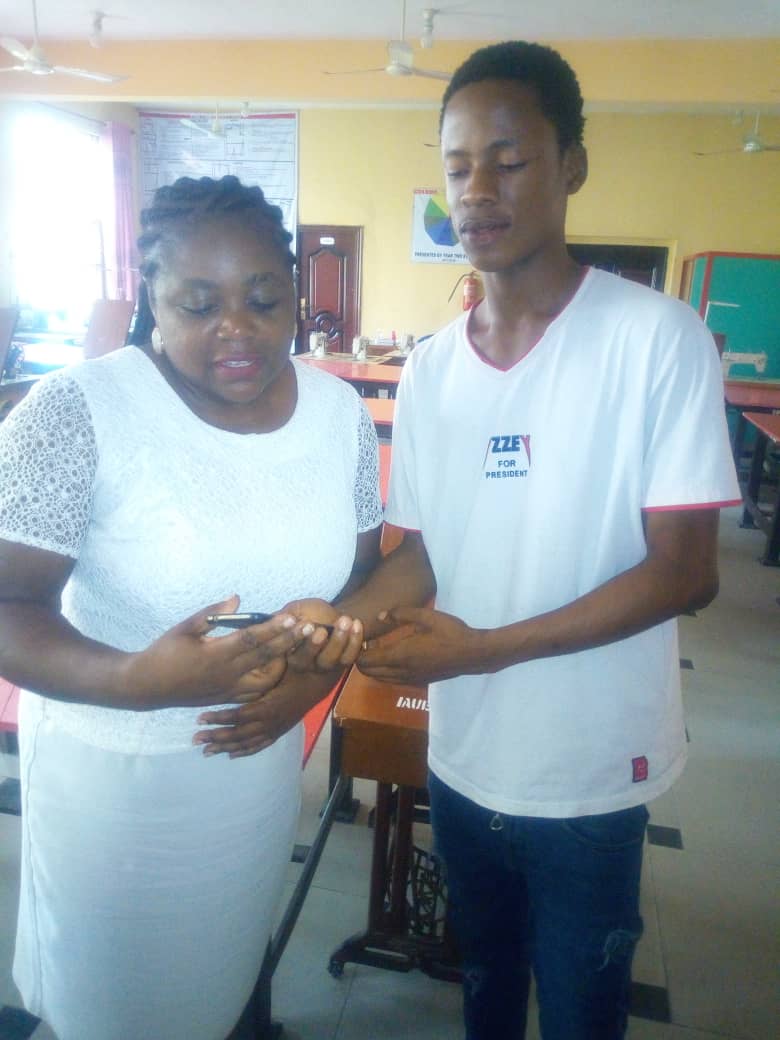 *Returns lost Smartphone even when he doesn’t  even have “Torchlight”phone.

The Vice Chancellor of Ignatius Ajuru University, Port Harcourt, Prof. Mekuri Ndimele, had granted full automatic Scholarship to a student who picked up a smart phone, and returned it to the owner.

The Student, who himself does not own a phone, had picked up a misplaced smart phone, and returned it to the owner.

Mr. Victor Ugochukwu, a 100 level Political Science Student of the Institution, had also been named as “Student of the Year 2020”, and would have his photograph, displayed on all notice boards of the institution, plus other incentives and privileges.
This is coming barely 24 hours after the incident happened.

In additional, the Vice Chancellor, Prof. Mekuri Ndimele, had already met with the student, who was accompanied by Dr (Miss) Pat. Spencer.

In a statement by the institution,the Management of Ignatius Ajuru University of Education has also elected Mr. Ami Victor Ugochukwu UG/2019/4789 – Level 100 student of Political Science, IAUE STUDENT OF THE YEAR 2020.

The Management commends the show of virtue of honesty by Ugochukwu, therefore, celebrates his rare conduct.

The award attracts the following from the University:

1. A certificate of honour.

2. Four years comprehensive scholarship – covering school fees and little for his upkeep while in school.

3. Cheque from the University to refund him his Year One fees already paid.

4. His photograph will be displayed on the University’s Electronic Billboard of Excellence for 6 months.

Mr. Ugochukwu has also received numerous gifts and pledges from some individuals who learnt about this rare conduct.

The background to the story, is that of a rare show of virtue and selflessness by  Ami Victor Ugochukwu. He is a 100 level student of the department of Political science of Ignatius Ajuru University of Education, Port Harcourt, who has unwittingly launched him out for strings of honour and rewards.

According to touching story, Ugochukwu does not have a  phone himself. Not even the cheapest popularly called “kpalasa” or “Torchlight”. But he picked a phone on a particular fateful day on campus at the Ignatius Ajuru University in Port-Harcourt, and returned the phone to the owner.

Dr.(Miss) Pat. Spencer, a Lecturer, had misplaced her phone after a Senate meeting in the University. Expectedly she hysterical and informed her colleagues. Not sure,they started calling the phone.

Surprisingly, Ugochukwu, 100 answered the call thus:”Are you the owner of the phone?.Yes, but it belongs to a Lecturer.”Where are you Sir, and what are you wearing?” The questions dazed the Caller, and after some silence, he answered “I am wearing a T-shirt on a Jean Trouser “OK, I am in front of the shopping complex” he said, adding you can come.As soon as the Lecturer got the news, she was hesitant to go, murmuring something like short prayers. The female Lecturer accompanied by one her Colleagues sauntered to the location.”As we got there, the young boy took the owner to where he picked the phone.
Explaining how he picked the phone, Ugochukwu said:”I heard it ring, and there was nobody there, so I picked the call.”

Meanwhile, a very Senior Lady in the Society, who does not want her name announced, pledged to deliver a new phone to the student, for what she described as an edifying exhibition of “resistance to take what is not yours.”

There are clear indications that more gifts, rewards are coming to Ugochukwu.

COVID-19 real, we shouldn’t joke with it, MFM’s Olukoya warns