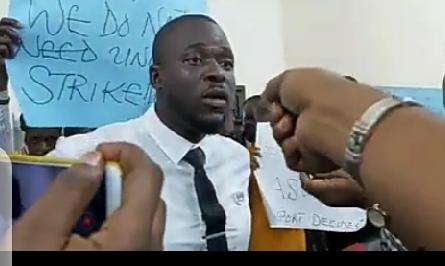 Angry students and members of the Students Union Government, SUG, of the University of Port Harcourt, UNIPORT today, Wednesday, disrupted an emergency meeting of Association Academic Staff Union, ASUU, in the Secretariat at the Delta Campus.

Dr Austen Sado who is the UNIPORT branch Chairman had called the meeting to deliberate on issue concerning the breakaway Congress of Nigeria University Academics, CONUA from ASUU by some group of lecturers.

Sado was giving his introductory speech when students who had arrived the venue with placards of various inscriptions like: “ASUU no more strikes” “Obey the FG enroll in IPPIS if nothing to hide” “We support FG for transparency” “CONUA mean well for students” etc, burst into songs drowning Dr. Sado’s speech.

The ASUU members had to disperse from the venue and relocated to a hotel in continuation of the meeting.

The peacefully protesting students stayed behind to ensure that ASUU members leave the venue.

The agenda of the meeting was not made known to Journalists. But it was not unconnected to the split in the body and the enrollment in the IPPIS.

As at about 10 am, 55 Lecturers had signed the attendance register for the meeting at the entrance of the ASUU Secretariat before the disruption.

It would be recalled that yesterday, a splinter group of ASUU in UNIPORT known as the Congress of University Academics CONUA, had directed its members to begin the enrolment for the Integrated Payment and Personnel Information System, IPPIS.

CONUA, the UNIPORT gave this directive on Tuesday in a communique signed by the Coordinator, Dr. Ovunda Ihunwo, and the Secretary, Dr. O .F. Mbalisi.

In the communiqué read to journalists in Port Harcourt, Ihunwo described as irritating the frequency with which some ASUU leaders at both the national level and branches across the country incited their members to embark on strike actions as a means of resolving industrial disputes.

He said ASUU leaders’ action was a show of ineptitude and lack of patriotism.

He said, “We call on our members to enroll for the Integrated Payroll and Personnel Information System IPPIS because the higher education system in Nigeria is on the verge of a dangerous precipice and there is an urgent need for all the stakeholders; the government, the general public and employees of tertiary institutions, especially academics, to adopt deliberate measures towards salvaging the system.”

Ihunwo alleged that much of the crises that had rocked UNIPORT in the past three years were orchestrated by the current Chairman of ASUU, Dr Austen Sado, accusing him of destabilising the smooth running of the institution.

But Sado has denied the allegations pointing that he was being accused because he had continued to stand for justice.

Sado said, “The allegations against me are the product of the figment of the imaginations of those who concocted them and nothing like that.”

Meanwhile, it was gathered that the new splinter group was simultaneously holding its meeting somewhere on campus at the time of filing this report.

The details of the meeting were not made known to our Correspondent at the time of filing this report.

Meanwhile, it was found out that the enrollment into the IPPIS was going on at the Ebitimi Banigo hall and it is being coordinated by officials from the office the Accountant General of the Federation.

Federal Government had warned that any lecturer who refuses to register would not receive his or her December 2019 salaries.