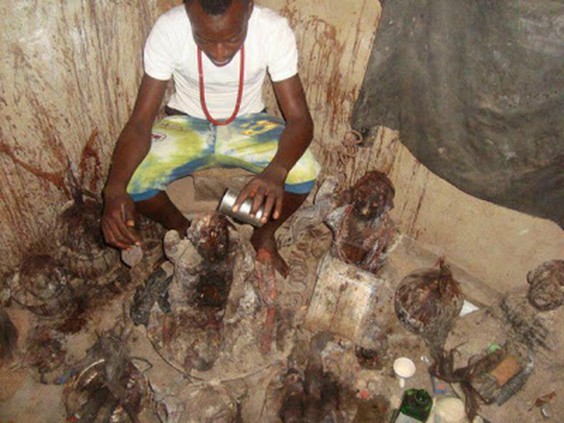 A secondary school student at the Ado Grammar School, Ado Ekiti, Matthew Favour, died on Thursday following injuries he sustained in a superiority contest with a colleague on the efficacy of their charms.

The incident occurred in the evening within the school’s  premises.

The 16-year old was said to have been engaged in a friendly dispute with a colleague over the ownership of a ball before it degenerated into an argument over who had more potent charms.

The late Favour, who was in Senior Secondary (SS2), before his death, was allegedly stabbed in the chest and later died at the Ekiti State University Teaching Hospital (EKSUTH), Ado Ekiti, where he was taken to for medical attention.

The suspect, who allegedly killed Favour, has since been taken into police custody.

Sources said Favour, an Ebira indigene from Kogi, was said to have initiated the encounter when he brought out a small axe and a knife  wrapped in a white and red scarf  and dared his colleague to a fight.

However, his colleague was said to have overpowered him after a while, stabbing him in the chest with the knife and fatally injuring him in the process.

It was learnt that the  development brought activities in the school to a halt as other students and teachers alike fled the premises.

When contacted, the Police Public Relations Officer in the state, DSP Caleb Ikechukwu, said he needed time before he could react, to enable him get a clearer report on the incident.

Police officers from the nearby Odo Ado Division were however, sighted  at the main entrance of the school which had been shut.

The police deployment followed alleged threats by the family of the deceased to embark on reprisal attack at the school.

Falayi said the students had dispersed before the incident attracted teachers who mobilised to the scene to convey the victim to EKSUTH.

“This incident really saddened us because it could have been avoided.

“What I gathered from students who were at the spot of the gory incident was that the duo were arguing over who had superior power and the deceased had earlier gone home to bring all those weapons which could not pierce the suspect when used on him.

“I was told that the suspect  later overpowered him, collected the  weapons and stabbed the victim in the chest.

“Our teachers, including myself, my Vice and Registrar alongside other teachers who were resident on campus here rushed him to EKSUTH; We even took the suspect along.

“The victim was put on life support, but that could not help the situation, as he died in the hospital.

“I had to quickly call the DPO of Odo Ado Police Station who reinforced his men and contacted the police station at Oke Ila to prevent the suspect from being killed by highly enraged family members of the deceased.

“The hospital insisted on doing the autopsy before releasing the corpse but the family resisted this.

“The police also took the suspect into custody. But I had to beg for security beef up around the school when there was a threat that 30 students will be killed in a reprisal attack today (Friday),” he said.

SELF DISCOVERY: A GIFT TO YOURSELF