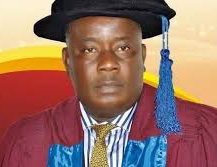 UNIPORT drags one of its Professors and Bricklayer to a Magistrate Court in Port Harcourt for allegedly stealing Chippings, slabs worth N6,000.

The Management of the University of Port Harcourt, UNIPORT, has dragged one of his lecturers, Professor Andrew Efemini and his Bricklayer, Richard Wogu, to a Magistrate Court for allegedly stealing three buckets of Chippings and three slabs valued at N6,000.

Professor Andrew Efemini, charged to Court by the management of UNIPORT for allegedly stealing N6,000 Chippings.

The Charge sheet alleged that Prof. Efemini and his Bricklayer allegedly conspired to steal the chippings.

The two accused persons pleaded not guilty to the charges and were granted bail to the tune of N100,000 by Chief Magistrate Isreal Agbeso.

Our Correspondent recalls that Efemini has been in running battle with UNIPORT Management and didn’t hide his health status as a diabetic patient in 2018 when was suspended for three months.

Professor Andrew Efemini is a professor of Philosophy at the University of Port Harcourt who was suspended by the institution in 2018 for allegedly inciting students’ to protest against the schools “No Fees, No Exam” policy had posted online then soliciting for help for the medications for diabetes.

I AM NOW A DESTITUTE

Having survived five months as against the statutory three months of suspension, I am left with no option but to inform the public that I now need financial support to continue to survive.

I have informed the university in writing that as a diabetic and hypertensive patient, my life is threatened by the cut of my salary as a result of my suspension from duty due to allegations over students related agitations over fee policies of the university of Port Harcourt.

I have contemplated suicide severally with a suicide message for the Nigerian people on how a Professor or anybody at that should not be treated. I hope the University of Port Harcourt will take note of this paragraph.

I see people who are supposed to be my friends pass me everyday unconcerned about how I survive. May be that is human nature.
Not even the Union ASUU has shown concern about my life threatening conditions. The Union where I was branch chairman for five years. Strange things happen.
Please, concerned Nigerians should come to my aid. I need at least N50,000 each month to buy my insulin alone. I also buy other drugs. I have a family to also run.
Please don’t ignore this post. It is my last effort to stay alive. People who think that speaking for students is a crime must be put to shame.

My account details:
Andrew Efemini
UBA
1004955569
THANKS TO YOU ALL. Students mobilize to support my survival. No amount is too small.

IGNATIUS AJURU UNIVERSITY OF EDUCATION RECEIVES A BOOST FROM THE RSG