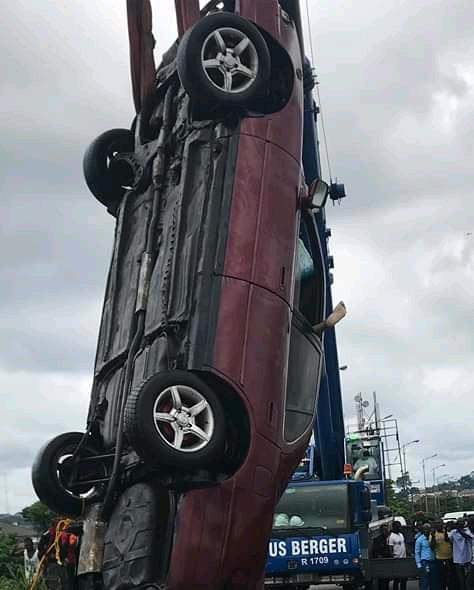 Unidentified body of Lady who drowned but the male Driver survived when a Camry Saloon Car plunged into the River of Nigerian Liquified Natural Gas, NLNG, Road, Port Harcourt at about 9pm on Monday night of September 16 was recovered today with the help of a crane owned by Julius Berger.

It was learnt that the Lady was stuck inside the ill-fated Toyota Camry Car.

The actual cause of the accident was not immediately known.

However, an Eyewitnesses around the area of the accident said that the Driver of the Car may have his vision blurred by smoky truck in front of him and in a desperate attempt to steer off it, he skidded into the River close to the Nkpogu bridge.

The unidentified Driver was able to swim to safety but the female occupant drowned.

Before the rescue operation, the accident scene was condoned off and traffic diverted back to Amadi Flats, Rainbow Town in Trans Amadi through Nkpogu bridge.

As expected, the rescue operation attracted a huge spectacle as onlookers gathered to catch a glimpse as Security Agencies monitor the recovery of the ill-fated car by Julius Berger’s Crane, today, September 16.

The Driver was said to be in an undisclosed hospital for medical attention while body of female occupant has been deposited at the morgue.

EXPERTS HARP ON IMPORTANCE OF BIODIVERSITY TO ECONOMIC DEVELOPMENT