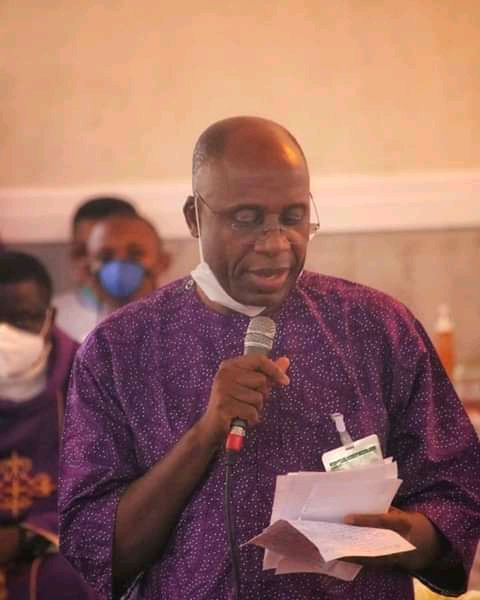 Minister of Transportation, Rt.Hon. Chibuike Rotimi Amaechi has paid glowing tributes to his late elder brother Dede Charles Amaechi (Oha) amidst funeral rites for the deceased as he was laid to rest, Saturday, in his country home, Ubima.
Amaechi said his late elder brother was like a father to him and his siblings as he took responsibility of them after the passing of their father, kept the family together and that his shoes would be difficult to fill.
Speaking at the funeral service held at  St. Theresa Catholic Church Ubima, Amaechi  said, “It is difficult to mange the death of my elder brother. I called him Dede and the reason why I called him that is because it’s like a tradition in Ubima. You cannot call your older brother or sister by their name, so I called him Dede and it became a household name. Most people didn’t even know that his name wasn’t Dede.
“I recall that in the struggle to get through the university, he made his own contributions, he wanted me to school overseas, unfortunately I didn’t, I had to school at the University of Port Harcourt.  He’s done quite a lot for all of us and the most difficult aspect of it is that he kept the family together; and I’m not in a position to do that now that I’ve become the head of the family, but we’ll try.”
Amaechi thanked everyone who have condoled with him and his family and those who joined him at the funeral both Muslims and Christians, to pay his last respects to his late brother. He prayed for God’s blessings on them and safe trip back to their destinations.

Plateau state Governor, Simon Lalong who was at the event in his capacity as Chairman, Northern Governors Forum and as the representative of the Nigerian Governors Forum Northern Governors Forum (NGF) urged the family to be consoled as the deceased lived a good life worthy of emulation and contributed greatly to the growth of the church of Christ.
Lalong said, “I stand here on behalf of the Chairman, Nigeria Governors Forum, Governor Kayode Fayemi of Ekiti State and  the Northern Governors Forum, which I’m the Chairman, and the overall chairman, the National chairman of our party, the APC, Governor Buni who is also here, to extend our condolences to the minister and his entire family  for this great loss said.
“Having read through what the man has done, I’ve met him several times, he has done a good work and it’s not easy for those of us who are catholics to be a knight and die as a knight. He has done everything for evangelism in the church and ours is to emulate him. So on behalf of all of them, jointly and severally, I once again extend our condolence to the church, to the Amaechi family and the entire village,” he said. Lalong further extolled the late Charles Amaechi, highlighting  his contributions to the church of Christ as he on behalf of the Plateau state delegation donated a 32-seater bus to the church in Ubima in memory of the deceased and all of his good deeds.
Dignitaries at the funeral include, National Caretaker Committee Chairman of the All Progressives Congress APC and Governor of Yobe State, Mai Mala Buni who doubled as the representative of the Progressives Governors Forum, Plateau State Governor, Simon Lalong, Minister of State for Petroleum, Hon. Timipre Sylva, APC National Secretary, Sen. John Akpan Udoedeghe, Director General, Nigerian Maritime Security and Administration (NIMASA), Dr. Bashir Jamoh, former Rivers State Governor, Sir Celestine Omehia amongst many friends and well wishers.

Amaechi and his wife, Dame Judith Amaechi at the funeral service.