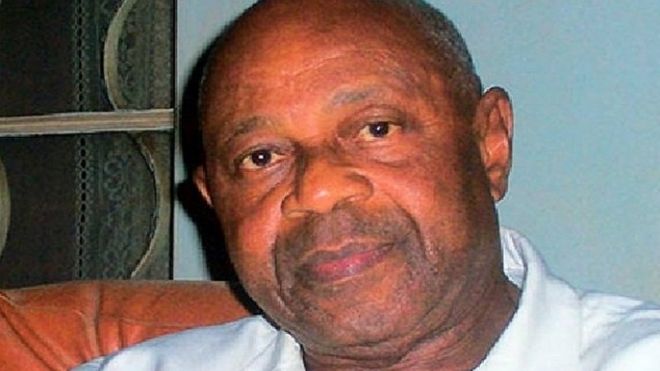 The Director-General, Nigerian Maritime Administration and Safety Agency (NIMASA), Dr. Dakuku Peterside has described the death of renowned virologist and social critic, Professor Tamunoemi David-West as a huge loss to Nigeria and humanity.

According to him, Professor David-West was such a colossus, who contributed immensely to the growth and development of Nigeria.

“Our dear Professor David-West was such a giant in academics, administration, education, public discourse, and an excellent statesman.

“For all of his 83 years on earth, he fought for a better society through his intellect, resources, connection, and sweat. He spoke boldly to power and stood by his conviction,” he stressed.

Peterside recalled the support the late David-West offered him during his 2015 gubernatorial campaign in Rivers State, adding that his words of wisdom proved very relevant.

He stressed further that Rivers state has lost one of her illustrious sons, who brought glory and honour to the state through appointments, service, and research.

The NIMASA DG stated that as Commissioner for Education in Rivers State, the late David-West contributed immensely to building of schools in several communities, in addition to Rivers indigenes getting scholarship to go to school.

“He was a forthright man, his words were his bond. Once he believes in a cause, he stays by it, he never wavered. He was such a principled man that could not be swayed by riches or money.

“His legacies are sufficient demonstration of how he impacted on humanity. He helped produce generations of leaders at the University of Ibadan, where he taught for several years until he retired.

“Despite his age, he continued to add his voice to progressive causes and contributed immensely to the victory of President Muhammad Buhari in 2015 and 2019,” he stated.

Dr. Peterside condoled with his family, the academic community, President Muhammadu Buhari and Rivers people over his demise.

Minister of Transportation Chibuike Rotimi Amaechi described the late Professor of Virology as a man known for his integrity and strong character which made him to be a friend of a decent Muslim, President Muhammadu Buhari.

Rotimi Amaechi, in a text message to the News Agency of Nigeria (NAN) on Tuesday, said that the death of Prof David-West was a sad development.

He described the late Professor of Virology as a man known for his integrity and strong character which made him to be a friend of a decent Muslim, President Muhammadu Buhari.

“It’s a very sad incident of a human legend, and the nation has really lost a patriot whose integrity was never compromised.

“David-West creditably served well as Commissioner for Education in Rivers and contributed greatly to the growth of the petroleum industry as Minister of Petroleum,” he said.

Amaechi prayed to God to fill the vacuum created by the exit of David-West in his family, Rivers and Nigeria.

Bola Tinubu, National Leader of the All Progressives Congress, APC, has described the former Minister of Petroleum Resources, Prof. Tam David-West as a nationalist and social critic who always spoke truth to power.

Tinubu stated this in his tribute to the Professor of Virology, who died on Monday at the University Teaching Hospital, Ibadan, Oyo State capital, at the age of 83.

In a condolence message signed by his Media Aide, Tunde Rahman, the APC National Leader said he would personally miss the former minister because he was one leader he admired and regularly exchanged ideas with.

The message reads: “Prof. Tam David-West was a nationalist, leader of substance and social critic who regularly spoke truth to power. His voice was always that of caution and restraint to steer the leadership away from the path of unconstitutionality and danger.

“He was highly-principled and morally upright. Somebody who served as Minister of Petroleum and Energy under Muhammadu Buhari as military leader and won Buhari’s respect and admiration must be a man of integrity and honesty.

“David West and I often speak to interface on issues and to exchange ideas. He was one intellectual and leader I admire. I will personally miss him.

“I mourn with his family, both immediate and extended. I mourn with the people of Buguma, Kalabari Kingdom, the government and people of Rivers State and Nigeria, which he served selflessly.

“My prayer is that God Almighty grant him eternal rest. I also hope and pray that his good legacies will continue to endure.”