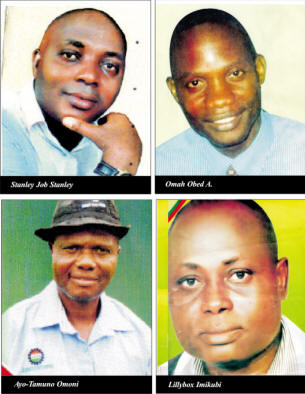 The members of the Fourth estate of the realms will in the month of July 2018 elect a new chairman who will pilot the affairs of the organization for the next 3-years in Rivers state Council of Nigerian Union of Journalists-NUJ. Going by the caliber of contestants in this years’ election, it is so, competitive as Mr. Lilybox Imikubi a staff of Radio Rivers with vast experience in the broadcast media is poised to emerge victorious having been screened and cleared to run for the Rivers state Council NUJ election in 2018. Others who had indicated interest to take part in the election include Mr. Stanley Job Stanley also from Radio Rivers Broadcasting Corporation and Ms Uche Agbam from Rivers State Television Channel 22. While Mr. Obed Omah is said to have been disqualified from participating in the election due to allegations leveled against him by members of the union in the state. Others who were disqualified from running in the election include Mr. Jimmy Opiki who had indicated interest to run for an office but stopped by the electoral committee as a result of certificate qualification disparity in the said criteria set up.

Analysis by www.towncrier.ng indicate that Rivers State Television RSTv Chapel had produced several Chairmen and leaders of Rivers state council of Nigerian Union of Journalists-NUJ and Ms Uche Agbam having been elected as Vice Chairman under the leadership of Mr. Ayo Tamuno and later Acting Chairman is alleged to have had lackluster performance that led one of the association’s chapel Federated Correspondents’ chapel into legal brouhaha. Still in the findings of www.towncrier.ng Mr. Stanley Job Stanley is said to have been transferred to Lagos office of Radio Rivers, Rivers state Liaison Office Lagos Nigeria after returning from his annual leave. With this on-going scheming and political intrigues Mr. lilybox Imikubi stands better chance of winning the election with ease as this is  his second time in contesting for the chairmanship of Rivers state Council of Nigerian Union of Journalists-NUJ.

Biometric audit of members may not have been a standard set out in the 2011 edition of Nigerian Union of Journalists Constitution as Labour unionism cannot be misunderstood with academic Union where academic qualification becomes a prerequisite for membership admission but in labour unionism holding job positions admits members into the Labour Union of one’s choice.