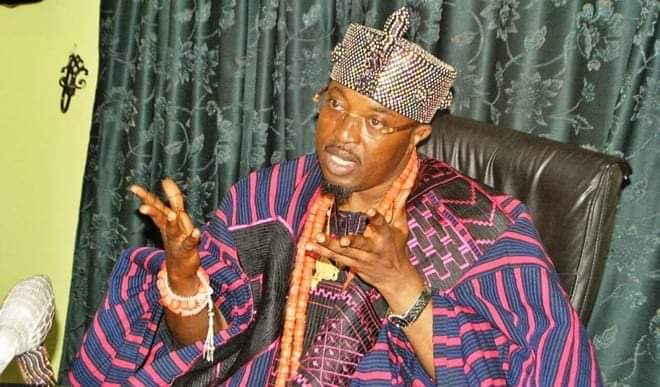 Some monarchs in the Osun West Senatorial district have called for the suspension of the Oluwo of Iwo, Oba Abdulrosheed Akanbi, shortly after he beat up another traditional ruler, the Agbowu of Ogbagba, Oba Dhikrulahi Akinropo, during a peace meeting for monarchs in Iwo, Ayedire and Ola-Oluwa Local Government Areas of the state.

The Oluwo, on Friday, dealt a blow on the Agbowu, whose domain falls under Ola-Oluwa council area, claiming he interrupted him during his speech by calling him a mad man.

The peace meeting, which was convened at the instance of the Assistant Inspector General (AIG) of Police, Zone 11 was meant to broker peace among the monarchs in the three council areas that had been enmeshed in land tussle for more than three months.

While the Oluwo advocated for leasehold of land, instead of outright sales for developmental projects in the area, the other monarchs insisted that their land belongs to them and they reserve the right to sell them or not.

The state government intervened at a stage but the latest intervention by the police through the office of the AIG Zone 11 suffered a twist when the Oluwo pounced on the Agbowu.

The incident was witnessed by the state’s Commissioner for Lands and Physical Planning, his counterpart, the Commissioner for Local Government and Chieftaincy Matters, the AIG for Zone 11, and about seven monarchs, including the Onigege of Igege, the Olu of Ile-Ogbo.

Narrating the incident to journalists at the State Hospital, Asubiaro, Osogbo, where he was accompanied by six monarchs to receive medical treatment, the Agbowu said the Oluwo punched him for telling him that he did not sell any land in his domain but his own land.

The monarch was rushed to Asubiaro Hospital after the incident by other monarchs at the meeting. The monarchs at the hospital were the Onigege of Igege, Oba Kazeem Oyediran, Olu of Ileogbo, Oba Habeeb Adetoyese, Onifin of Ikonifin, Oba Solomon Ojo, Oluwo Oke of Iwo Oke, Oba Kadiri Adeoye and Onisara of Eesu, Oba Moshood Oparonla.

The Olu of Ileogbo, Oba Habeeb Adetoyese, who spoke on behalf of the monarchs, said, that they received an invite to a peacemaking meeting over an allegation that Oba Akanbi levelled against them.

He alleged that the Oluwo pounced on Oba Akinropo while he was making his speech at the peace meeting.

He said, “In October last year he wrote a petition against us to AIG Oyebade, that, we are threatening his life and we are selling his land. The AIG said he doesn’t want any issue in our regions, that we should solve it amicably among ourselves. The governor also gave us the same advice when we saw him on the matter

”The first peacemaking meeting that was organized for us at Iwo Local Government Secretariat, Oluwo disrupted the meeting, he came with thugs saying everybody should go to his domain.”

He said when the government realised that the meeting did not work, they organized another meeting. He said, ”Letter was sent to us for the invite and we all went for the program…when he (Oluwo) was talking, he alleged that, I, the monarch of Ile-Ogbo, was selling his lands and that, also, the Agbowo of Ogbaa Gbaa, the Onigege of Gege is also selling his land. I am selling only selling Ile Ogbo’s land and not Iwo land.

”In the meeting held the commissioner said if it is land he can’t intervene on any issue pertaining to land. He advised that the court can decide on that or that we meet the governor to sort things out.

”As the AIG was addressing us, the Oluwo started shouting that chaos and war will happen in the community. He stood up and started beating Agbowu. He beat him to the extent that it was the AIG that rescued the king from Oluwo. We are still in shock for a king to behave in that manner. When the man started feeling dizzy, we had to rush him down to Asubiaro hospital. He sustained an injury on his cheeks.

“We implore the government to suspend him (Oluwo) so that we can have peace in our domain. We have called our subjects that there is no cause for violence but he should be checked. Only the governor can caution him and if that is not done, he will destroy the entire region.”

Also, Babajide Siyanbola who is the legal adviser to Agbowo of Ogbaagbaa, said legal action will be taken on the matter.

Reacting to the allegation, the Oluwo in a statement, said that he was truly invited to make peace on his stance to curtail excessive land sales by monarchs under his domain, a pronouncement that did not go down well with those affected as they regrouped to act against his authority as the Oluwo who gave them the crown.

He said, “At the peace meeting held at AIG office, Agbowu of Ogbaagbaa interrupted me while making I am making my speech and started calling me unprintable names, pointing his staff of office at me while attempt to stick the staff in my eyes; I heavily rejected it with a force which the Agbowu could not withstand.

”How could a constable openly insult commissioner of police and make an attempt to beat the CP? Can any monarch try such with Ooni, Alaafin?” he said.

What a punch! Oba of Iwo explains why he beat up another monarch

SEINYE LULU-BRIGGS: THIS WOMAN IS IMPOSSIBLE; SHE GOES TO COURT AGAIN!