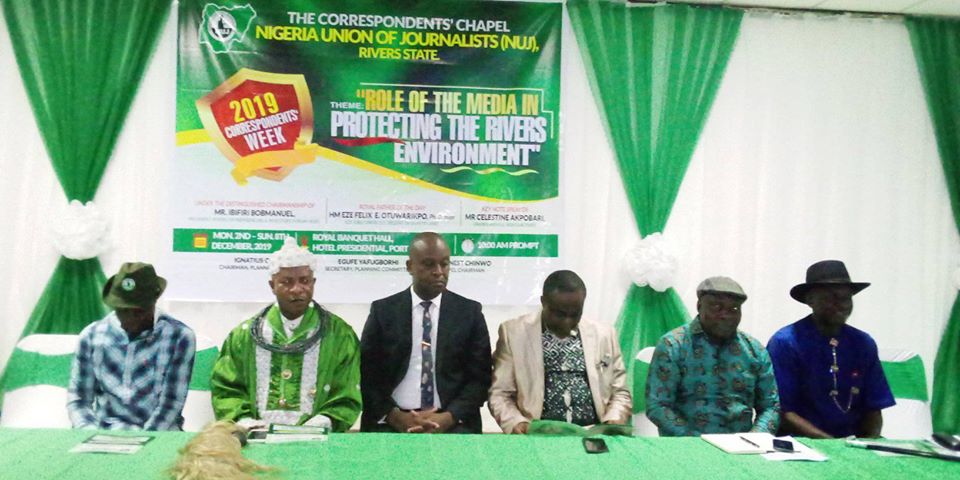 The Rivers State government has called on journalists practising in the state to join in the campaign for the protection of the environment.

The Permanent Secretary of the State Ministry of Information and Communications, Pastor Paulinus Nsirim, made the call on Monday in Port Harcourt, while declaring open the 2019 Press Week of the Correspondents’ Chapel of Nigeria Union of Journalists (NUJ) in Rivers State.

Nsirim insisted that there is a collaboration between those responsible for the pollution of the environment and those whose responsibility is to protect lives and property of the people.

“We need to begin to interrogate the policies and programmes of the Federal Government as it affects the Rivers environment. What has journalists done about the United Nations Environment Programme (UNEP) report that was released in 2011.

“We owe society a duty to ensure that we leave behind a worthy legacy. Posterity will judge us if we fail to make impact and rewrite the history of Rivers environment. It is a challenge to all of us.”

Reviewing the keynote address of the 2019 Press Week, which is; “Role of the Media in Protecting the Rivers Environment”, an environmental expert from the University of Port Harcourt, Dr. Ferdinand Giadom, said there are several oil spills in the Niger Delta region that were not attended to.

Describing the Niger Delta region as the most sensitive environment on the planet Earth, Giadom stated that journalists have abdicated their responsibility of adequately reporting the environment.

In his remarks, Chairman of Nigeria Union of Journalists (NUJ) in Rivers State, Comrade Stanley Job Stanley, said the topic of the Correspondents’ Week serves as a self-appraisal for journalists practising in the state.

Stanley, who was represented by the Vice Chairman, Comrade Paul Bazia-Nsaneh, said it is the responsibility of journalists to protect the environment through their reportage.

Rivers State Governor, Nyesom Ezenwo Wike has declared that with elections effectively over across the country, the focus should be on governance for the good of Nigerians.

Speaking during a Courtesy Visit by the Director General of the National Youth Service Corps (NYSC), Brigadier General Shuaibu Ibrahim at the Government House Port Harcourt on Monday, Governor Wike said that politics should be de-emphasized at this time.

“Politics has come and politics has gone. We have won the election here, they have lost. But they have won in other places. Politics has ended and we are now talking about governance.”

Governor Wike decried the situation where Corps Members device different schemes to ensure that they are posted back to their home state.

He said: “We should try and discourage the idea that you must serve in your state.  That is the essence of the NYSC Scheme.”

He assured that the Rivers State Government will continue to promote the welfare of Corps Members serving in the state.

“The corps members posted here serve our state. So, it is our responsibility to take care of their welfare.  They are working for the benefit of Rivers State”, he said.

Governor Wike said that the Rivers State Government is still willing to assist the family of Late Corps Member killed during the rerun elections.

The Governor assured that the Rivers State Government will deliver the auditorium at the Permanent Orientation Camp and other projects during the first year of his second term.

Earlier, NYSC Director General, Brigadier General Shuaibu Ibrahim thanked the Rivers State Governor for his outstanding contribution to the development of facilities at the permanent Orientation Camp of NYSC.

He commended the Rivers State Governor for the payment of allowances to Rivers Corps Members and the construction of a 5000 seater auditorium at the Orientation Camp.

He described Governor Wike as an NYSC friendly Governor who has encouraged Corps Members to give their best.

“I thank you most sincerely. Others are watching. I encourage them to emulate the Rivers State Governor “, he said.