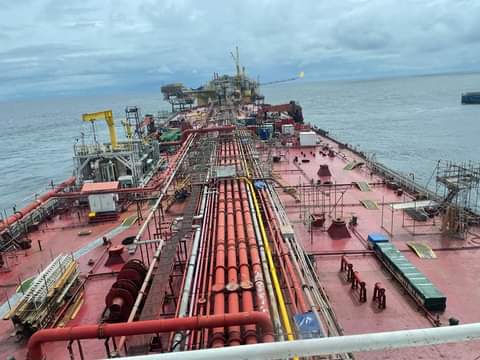 Senator Albert who is the Chairman, Senate Ad-Hoc Committee on Oil lifting, theft and the impact on Petroleum Production and oil  had last week led the committee on oversight visits to some key oil installations and platforms in the Niger Delta Region describing the level of theft as a national crisis.

The visit of the committee to oil platforms came four days after a nationwide protest by members of Petroleum and Natural Gas Senior Staff Association of Nigeria, PENGASSAN, demanding action from government and stakeholders following the economic havoc caused by oil thieves.

According to the latest Crude Oil and Condensate Production data released by the Nigerian Upstream Petroleum Regulatory Commission, Nigeria’s oil production fell below one million barrels per day mark last month, coming in at 972,394 barrels per day, the lowest daily average output in 25 years.

Officials of the Nigeria Upstream Regulatory Commission, NNPC Limited and other regulators in the petroleum industry as well as oil majors are expected to attend the meeting.

It would be recalled that the Senate Adhoc Committee set to investigate Theft and the Impact on the nation’s Economy, had described the level oil theft in the Niger Delta Region as a National Crisis.

Chairman of the Committee, Senator Albert Bassey who said this shortly after the committee’s week-long visit to oil producing facilities in the upstream, midstream and downstream sectors operating in the area, explained that the on-site investigations have avail the committee more detailed information on the foundational cause of the national menace and how it can be resolved.

“We are better informed now since we have expended the last one week exploring various Oil and gas facilities in the region. It gives us an idea of and perspective of what is happening and the best way to tackle it. I think it’s a National crisis and we want to take that National approach where every stakeholder is given an opportunity to contribute at a public hearing. I assure you, we won’t spare any defaulter and we will apportion blames to who’s concern”, Senator Bassey said.

Chairman of the Senate Adhoc Committee on Crude Oli Theft and the Impact on the Nation’s Economy, Senator Albert Bassey said the committee will ask the nation’s maritime security some salient questions at a public hearing on issues of oil theft, at the National Assembly on Wednesday.

“As a committee, we will make a very strong recommendation to the Senate where lasting solution can be reached. I believe the security agencies have lot responsibilities on their shoulder: The Navy is in charge of the nation’s maritime boundaries, while the Army is in charge of the land, the Air force in charge of the Air. One begins to wonder how vessels laden with stolen crude oil leaves the shores of the country without any monitoring. And based on the process sequence we have been exposed to on how crude is exported, there is nothing like stealing here. Because, before any vessel leave or comes into the country, it is registered and approved. So there are some fundamental questions we intend to ask during the public hearing. So that we can address some foundational issues”, he said.

Senator Albert Bassey who is also the Senate Committee Chairman on Upstream, said the adhoc committee will also make recommendations to the Senate on amending the Petroleum Industry Act on over sight functions of the regulatory bodies in the sector.

“We can’t have a dual regulator in a single industry. Our various stakeholders are complaining in this regard. We have instances where you find the Authority in an upstream asset. This is one of the areas we want to strengthen. To enable and ease the act of doing business. This is one of the clear intent of the Petroleum Industry Act. We are very cautious of amending this act. And we insist that Upstream asset must be monitored by NURPC, while the midstream and downstream must be monitored by the Authority because they have what it takes to tackle these issues”, Senator Bassey said.

Our Correspondent reports that the Senate Adhoc committee will relay its findings to the Senate, while a public hearing involving players of the oil industry.