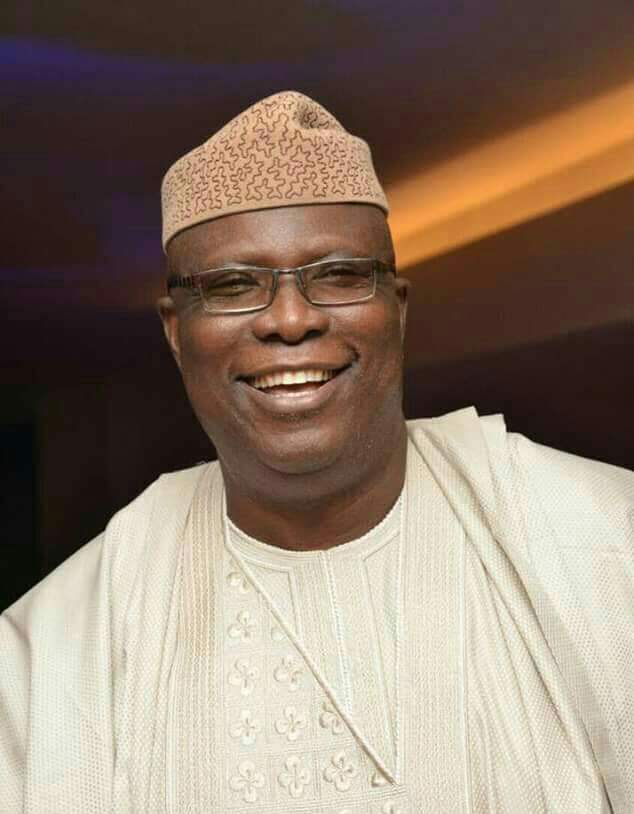 What I know about Babafemi Ojudu

My first encounter with Senator Babafemi Ojudu, Special Adviser on Political Matters in the Presidency, was in 1994. I just left the university and was still wet behind the ears. With a note from Chief Olugbayo Ogunleye, then of the Federal Ministry of Information, Ikoyi (at Ado Ekiti, Chief Afe Babalola had earlier handed me over to him for a job), I made my way through the chaotic traffic lock jaws of Oshodi towards Ajao Estate, Lagos. My destination was a rented duplex on Ibiyemi Street, headquarters of Independent Communications Network Limited, publishers of TheNEWS, PM NEWS, and Tempo.

On the premises, I made for the reception, where the Chief Security Officer, popularly called “Old Soldier” held sway. On the wall, cover designs of past editions of TheNEWS and Tempo were pasted and they further fired my resolve to become a seasoned journalist like the man I came to see but who I had never met but knew by reputation. I settled down to read some old copies the company kept there for visitors. I saw great political writings, daring exclusives, incisive interviews, scintillating travelogues, wonderful business analyses and others. Were the writers and the stories real or pseudonyms or attempt at mythopoesis? I was curious because what I read were too daring, especially during the time of maximum ruler, General Sani Abacha.

One after the other, reporters, senior staff writers, assistant editors and others started coming in. I saw Jenkins Alumona who was in charge of sports, now the boss of Strategic Outcomes, a PR/marketing outfit; Waziri Adio, now Executive Secretary, The Nigeria Extractive Industries Transparency Initiative; Akin Adesokan and Ebenezer Obadare (the two are now Associate professors abroad); Gbemisola Adeoti, Simidele Awosika, Ayo Arowolo and Ike Okonta. Then Ojudu, tall and dark complexioned, entered the reception area, he slung his black jacket over his left shoulder. He wore a white shirt with a red tie which he unknotted a bit, a sign that he must be tired.

I sprang to my feet and greeted him, telling him I came with a message from Ekiti. His eyebrows arched in curiosity. I handed him the Chief Ogunleye’s card. He asked me to follow him upstairs and I did. The rest is history. He made me to achieve my dream of becoming a journalist in his company and I rose to become the editor of TheNEWS.

My working relationship with him summarised almost everything about him I knew for over 22 years now: Readiness to assist people, frankness, boundless energy, risk taking and most importantly, he oozes out ideas like no man’s business. Apart from being humorous, he is a man of sartorial elegance, foreign or indigenous. In fact, these stand him in good stead in his adventure in politics.

That he brought me into journalism needs no belabouring here. But he told me something the first day I met him which shows that when it is time to work, personal relationship counts for nothing! He looked up from perusing my CV and said: “You see, if you want to survive here, you must work hard and be a man of integrity. If you fail in these, I will be the first to recommend your sack, even if we are of the same mother!” His countenance showed that he was dead serious and this helped to put fire on my buttocks so much that from day one, I started firing from all cylinders. This paid off one day when he took me in his car to a function on Victoria Island. On the Third Mainland Bridge, he revealed to me: “Management has decided to promote you from Senior Reporter to Senior Staff Writer” (a jump over Staff Writer.

Senator Ojudu is not the type of media manager who would issue out assignments and just sit on his backside, sipping coffee or humidor or cognac. He was also a reporter, using his vast high level networks to get exclusive stories, documents and interview appointments. When it was time to work, he could walk from his office 100 times, to the computer room and newsroom, barking out orders at reporters. At times, he would inject humour. There was a day he asked one of the editors whom he assigned a particular story. It was Omo Asun, the name of the basket ball player-like reporter. Ojudu retorted without smiling himself that he hoped Omo Asun would not “sun story yen je”! Meaning that he hoped the guy whose name rhymes with Yoruba word for roasting would deliver…Everyone in the newsroom bent double with laughter as Ojudu walked away. At one of our editorial meetings, he shook his head on the way many Nigerian reporters had thrown professionalism to the dogs, saying some of them “are no longer journalists but jolalists (wealth chasers).

A further demonstration of Ojudu’s boundless energy is that when new ground breaking tasks were to be done, he was the one his colleagues (Bayo Onanuga, Idowu Obasa, Dapo Olorunyomi, Kunle Ajibade and Seye Kehinde) would give it. For example, TheNEWS was three months in the market when Babangida sealed up its premises and disrupted its operation.
The company was determined that they would not stop publishing. Babangida declared the publishers, including Ojudu, wanted on national television and radio. The General went further to ban the publication of the magazine. Ojudu and his colleagues shifted to another gear! They decided to suspend TheNEWS magazine and came out with Tempo. In the words of Ojudu in ojudubabafemi.com: “All of you I believe know the history of Tempo. It was a thorn in the flesh of the worst dictators that have bedevilled this country.” He was the pioneer editor of Tempo, which attracted this writer from campus.

After about six months of editing Tempo, Ojudu’s colleagues again to put together a team to produce an afternoon newspaper, P.M. News, for Lagos and its environs. He was called upon to bring up a daily and that was AM News.

Senator Ojudu has ability to issue story ideas ceaselessly to reporters. If they should come back in two hours, he could give them fresh ones, He has that infinite capacity. We editors were always happy when he attended our meetings; a great idea would drop from him. When we had argued back and forth, he would put his left hand around his waist, still sitting down (he is one of the few who sit akimbo!) and intervene the way hot knife slices through butter. Then, you have your story!

Having worked under him and I came out with this impression that he is a great team player. Decisions, after being hotly debated (at times, we editors were present at the management meetings) were taken by him and his colleagues and they were binding on all. The company was not operated dictatorially.

The other attribute is that Ojudu is daring like his colleagues. Despite the atrocities perpetrated by military rulers who killed people with no more efforts than cutting twigs, Ojudu and his colleagues did not relent in fighting for democracy. Between 1993 and 1998, Ojudu, as contained in ojudubabafemi.com, was arrested, tortured and detained for not less than 15 times. His stint in detention ranges from one week to several months, the longest of which was nine months in a secret cell within Ikoyi Cemetery. He was arrested on returning from a trip to Kenya where he was invited to speak to journalists and publishers from across the world on the state of media in Nigeria under the Abacha jackboot regime. It was a harrowing experience for him. He would not be released until one month after the death of General Sani Abacha in 1998.

No wonder, Mr Dare Babarinsa, a distinguished journalist too and one of the brains behind Tell magazine, called him a reporter on the beat. In the words of Babarinsa: “Femi Ojudu was a member of an incredible team that founded the radical magazine, TheNEWS, under the leadership of Bayo Onanuga, a fearless and competent journalist. Femi went to prison and into exile in our fight to establish democracy in our land. When Abacha died suddenly in 1998, Femi came into the sunshine with a bushy beard. He is now back in the power loop as the Special Adviser on political affairs to President Buhari. Congratulations to a hero of democracy!” When he came out of Abacha’s gulag with this Old Testament Prophet beard, Ojudu’s son could not recognise him!

Ojudu was born on 27 March, 1961 in Ado-Ekiti in Ekiti State to the late Alhaji Afolabi Ojudu and Madam Raliat Boluwade Ojudu. Ojudu was, according the information he provides on his ojudubabafemi.com, educated at Emmanuel Primary School Ado-Ekiti. In 1973, he was admitted into Ado Grammar School also in Ado-Ekiti for his secondary school education. After acquiring his West Africa School Certificate in 1977, he worked briefly as a Clerical Officer in the then Ondo State Ministry of Education. From there, he proceeded to work as a Personnel Clerk at the Federal Mortgage Bank in Lagos.

In 1980, Ojudu was admitted to read English Studies at the then University of Ife (now Obafemi Awolowo University), Ile-Ife, where he graduated in 1984. He did his Youth Service at the Publication Unit of the Faculty of Education, University of Ibadan, Ibadan in 1985. At the completion of his National Youth Service Corps Scheme, he was employed as a staff reporter in the Guardian. This was the formal beginning of his career as a journalist.

His interest in Journalism could actually be traced back to his days as a secondary school student. Noticing that he was fond of drawing caricatures of his school mates on the classroom board with some critical prose by it, the school principal, Chief Adejuwon, decided to re-channel his energy by buying a shortwave radio for him with the instruction that he should every morning tune to both BBC and VOA. Every morning he would listen to the news on both channels and would write them out and paste on the school’s notice board for the benefit of both students and staff.

On graduating from secondary school, his dad insisted on his going to read law but his love and interest was for journalism. When he was admitted to study English at the then University of Ife, it was a first step in his effort at realizing this ambition. Ojudu worked as a reporter for The Guardian and also found time to do a Masters degree in Political Science at the University of Lagos 1985 and 1986.

In 1987, he moved from The Guardian to African Concord Magazine as a Staff Writer. Between 1987 and 1992, he was variously promoted as Senior Staff Writer and Assistant Editor. His job as a writer for the African magazine took him all around the entire country and many countries of African to cover major events from natural disasters to wars, conferences and inauguration of presidents.

In 1992, Ojudu quit his job in African Concord in protest of the request by his publisher, late M.K.O Abiola, to apologise to the then President Ibrahim Babangida over a critical story done on the military regime.

A Title At 60 – Senator Babafemi Ojudu