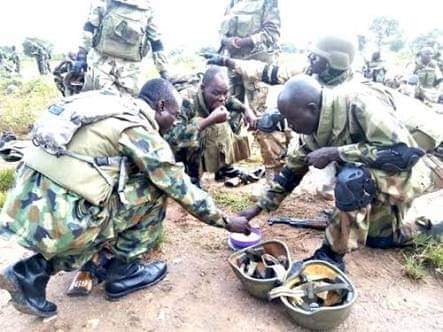 That is a very poor number compared to the challenges they are faced with. So if you do not understand why we condemn the continuous unlawful detention of ElZakzaky and killing of the sect members who are being emboldened, maybe you can understand it from this angle since you are forming solidarity with our soldiers.

Our soldiers are overworked and underpaid. These men are suffering. The government keeps talking about defeating bokoharam but why do they keep quiet when our soldiers are murdered? Why do we hear something different and see something different? Why will 20 fall and they’ll tell us only 2 did? I don’t want to start telling stories some soldiers have told me in confidence but the fact is that these men are suffering and the government is doing nothing to support them and restore their confidence. They fight on empty stomach. They have sleepless nights. They are depressed. Poor medical attention. Under paid. Sometimes they throw water and food down to them from the helicopter as if they are animals.

During the World Cup season, we heard a barracks was attacked in Maiduguri, the headquarters issued a statement denying the attack ever happened. I believed. Days later, we saw pictures of soldiers carrying bodies of their colleagues for burial and some of us were forced to ask if those were sticks in the casket since we were told nothing happened. And there was no government official at sight. Our poor soldiers and families of the fallen were left to mourn alone.

When you keep supporting the intimidation of the Shiite, you are doing the soldiers no good. You are only a heartless fellow who does not really care about them but claim you do because if you do, you’ll know the military is over stretched and cannot afford to fight another terrorist group. Your soldiers are not robots. They are human.

Soldiers are not meant to stay more than 3 months in Sambisa but some of them have stayed for more than 3years!! That is why Colonel Abu was killed. He became a target for bokoharam. The brave young soul had overstayed his welcome in that forest but they overused him, leaving his wife and daughter to mourn for the rest of their lives. This is the case for many of our fallen heroes.

And the bloody civilians indirectly advocating for the emergence of another terrorist group by supporting the killing of the sect members won’t join the military and fight when trouble starts instead they’ll t when trouble starts instead they’ll be among those mocking our soldiers for not doing enough. Chicken hearted men whose third leg disappears or turns to my own in the face of trouble.

You keep screaming about solidarity with soldiers. I hope it is not just your mouth that supports them. I hope your pocket does and I’m not talking about giving change like you do to policemen. They have families who need school fees and other basic needs. Many of them need medical attention. What are you doing for a soldier as a way of saying ‘thank you for your service to the nation’? Especially those who have fought, those fighting and the families of fallen heroes.

Before you come to spew thrash on my wall, forming solidarity movement, make sure you are walking your talk. My Road Accident: A Letter of Gratitude to You!

Tribute to my mentor: Aare Afe Babalola’s 55 Years @ The Bar