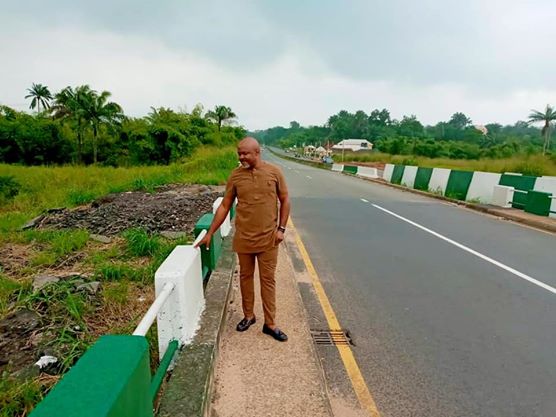 …Commends Buhari’s administration for responding to plight of Commuters on that road.

Motorists and Commuters who travel through the hitherto deathtrap on the notorious Ulasi-Okija Bridge along the Owerri-Onitsha Expressway in Anambra stretch now heave a sigh of relief as Federal Government completed rehabilitation work.

Our Correspondent who drove on that road precisely on June 18,2020, while coming from Asaba-Onitsha-Owerri traveling towards Owerri towards Port Harcourt, observed a massive reconstruction work being carried out by one of the popular construction giants in Nigeria.

An excited Commuter, Uzordimma Enzo Nzeribe, who obviously has monitoring the state of the road, especially the Ulasi-Okija Bridge posted on Facebook timeline said: “In line with General Muhammadu Buhari’s unfettered devotion for good governance, the suffering of commuters plying Onitsha-Owerri Road has finally become a thing of the past, just as the FG intervenes.

“The bridge which was recently on the verge of collapse has been fully repaired by the Buhari administration.

He said he personally visited the reconstructed bridge and posted a graphic photograph of the “before” and “now” state.

He wrote “I personally visited the reconstructed bridge and witnessed the development and can confirmed that the Buhari-led government has yet proven to be committed to the plight of the masses, following rapid renovations made by the federal government on the Ulasi-Okija Bridge, which is intended to further safeguard the precious lives of Nigerians and also avert unexpected calamities on the ever-busy bridge.

Nzeribe further said stated that the proactive step by the Buhari-led government further compliments his promise to deliver the dividends of democracy and good governance to all Nigerians, irrespective of tribe or political affiliations”.

WHY IZE-IYAMU IS AHEAD OF OBASEKI By Pedro Obaseki Jnr