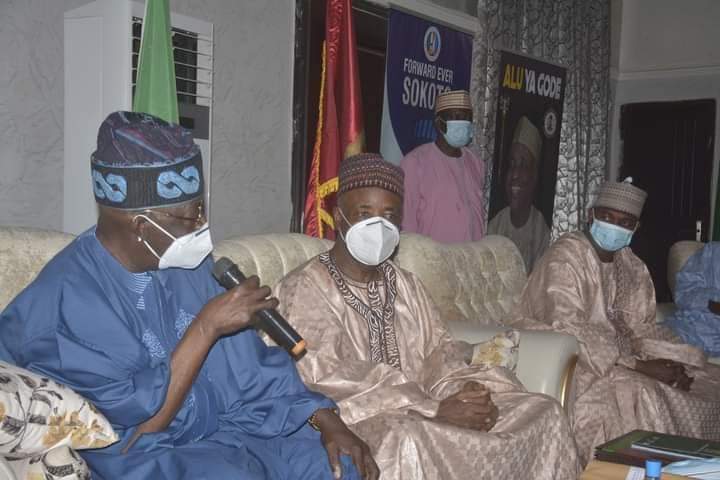 The National Leader of the All Progressives Congress ( APC)Senator Bola Ahmed Tinubu, on Saturday, condoled Senator Aliyu Magatakarda Wamakko, on the death of his 23-year old daughter,Sadiya.

Tinubu, a former Governor of Lagos State said: ” We are here to thank God for you . In everything, He has taught us to bring grateful and faithful.

” Whatever He allows to happen to us, we must should thank Him . Bereavement is not easy , particularly of a daughter, but that is the way God wants it.

” If we lament more than this we will be sinning, hence, we must accept it as an inevitable act of God.

” God knows what to do and we should accept it faithfully. We have been asked to faithfully accept all what He ordains, in time of sorrow and happiness.”

Tinubu who prayed for longevity and happiness for Senator Wamakko and his family, also prayed for the repose of the soul of the deceased.

Wamakko further lauded Tinubu for the show of brotherhood, support and concern .

The former Governor of Sokoto State also prayed the Almighty Allah to crown all the efforts of Tinubu with success, as well as divinenly provide plausible solutions to all the problems plaguing Nigeria .

Special prayers session for the repose of the soul of the late Sadiya was led by Sheikh Bashir Gidan Kanawa.

Those on the entourage of Tinubu include Senators Adamu Aliero and Tanko Al-Makura, former National Chairman of the defunct ANPP and one of the APC Founding Fathers, Alhaji Yusuf Ali, former EFCC National Chairman, Alhaji Nuhu Ribadu and Alhaji Ibrahim Masari, an APC Chieftain.