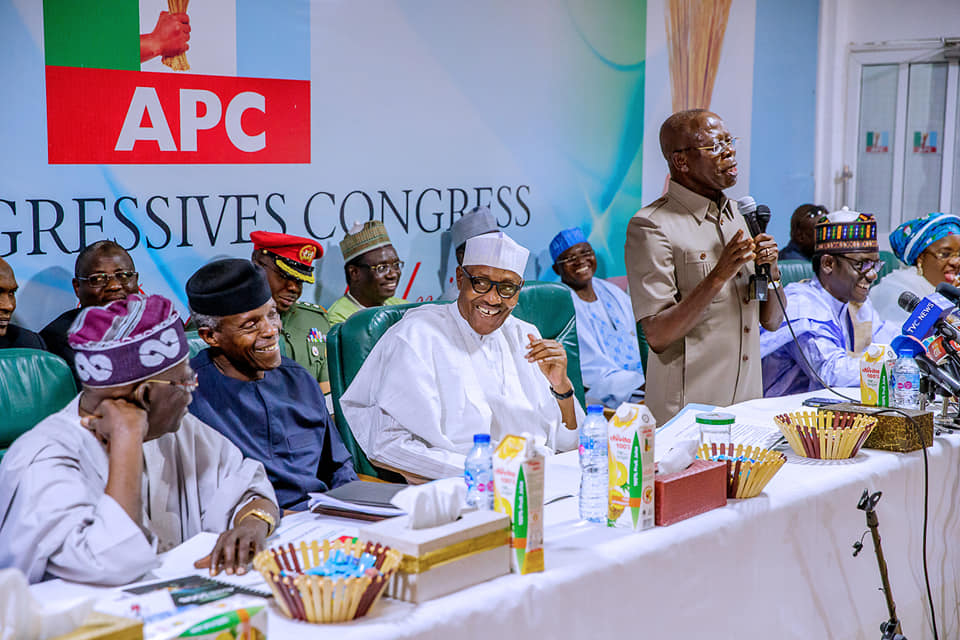 ….. Why Akpabio was walked out

There was plenty of drama before the NEC meeting of APC on November 22, 2019. The central character was Godwin Obaseki, Edo State Governor. The Governor spent a lot of money, while plotting the removal of Comrade Oshiomhole as the National Chairman of the party. He paid the Director General of APC Governor’s Forum to put on serious pressure to call a NEC meeting. He secured a black market court order from Edo State High Court to recognize his Edo State factional chairman, Anslem Ojezua as the chairman of APC in that State. He flew into Abuja a day or two before NEC and began to share 500k to 1m to State chairmen of APC in the company of Sen. Domingo Obende and Anslem Ojezua.

He didn’t stop there. He promised many Governors that he would help them secure favorable oversea loans and neatly launder their money. All looked set for business as some of those who collected money began to append their signature to a proposed Motion of No Confidence.

Unknown to the plotters, Oshiomhole was collecting his signatures for a vote of confidence. In his usual manner Comrade Oshiomhole monitored Obaseki’s list which contained less than 40 names. Comrades list had over 85 signatories and in fact some persons signed both sets of list.

In the meantime, Akpabio was running around soliciting to move the motion of no confidence for a fee of about 75m. The deal was done. Obaseki promptly commissioned Akpabio to do the job.

The first set back occurred when Anslem Ojezua was not allowed into NEC meeting. Instead, Col. Imuse, the acting chairman of APC in Edo State was allowed in. Ojezua was overwhelmingly frustrated and left to roam outside the venue of the meeting.

The second set back was the speech of president Buhari. He commended Oshiomhole and praised his energy. He urged party members to respect the party constitution and do nothing to undermine the party. He told the gathering to respect the organs of the party so that the party can remain vibrant and outlive his regime as he had no plan to run for a third term which was mischievously rumored round the country.

After the President’s speech, the media was excused out of the meeting and just before the meeting started, Oshiomhole spotted Akpabio inside the hall. He asked Akpabio to leave the hall as he was not a NEC member. Despite protestations, Akpabio was walked out by security men. This was the third upset for Obaseki. 75m was gone.

With Akpabio out of the meeting, Obaseki began to urge the Zamfara State APC chairman to move the Motion of No Confidence on Oshiomhole. The Chairmen of the southern states shouted the Zamfara Chairman down as he raised up his hand to indicate that he had a Motion to move. He promptly ended his ambition, while Obaseki desperately continued to urge him to move same until a former Senator who sat close to the Zamfara APC chairman  told Obaseki to move it himself if he was so desperate.

Comrade Oshiomhole then addressed the meeting and issues of finances were referred to the Finance Committee. NEC decided to set up a national reconciliation committee to deal with all party disputes. The planned motion of no confidence died a natural death while no mention was made of Edo State at all.

The Bayelsa APC chairman moved a motion for adjournment of NEC and it was duly supported. The meeting was adjourned till further notice and Edo State resources wasted by Obaseki and his co- travelers on a failed project. Obaseki is still hopeful of instigating Oshiomhole’s removal at the next NEC meeting anytime next year.