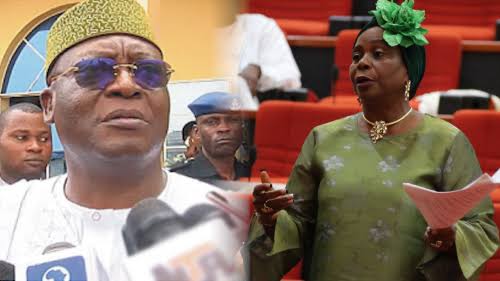 The Kaduna Division of the Court of Appeal has upheld the tribunal judgment which nullified the election of the spokesman of the Senate, Senator Dayo Adeyeye, declaring Senator Biodun Olujimi and the candidate of the Peoples Democratic Party as the winner of the Ekiti South Senatorial election held on February 23.

The Independent National Electoral Commission, INEC had declared Dayo Adeyeye of the All Progressive Congress as the winner of the February 23, 2019 National Assembly election, but Olujimi challenged the result at the tribunal on the grounds that she scored the highest number of votes cast.

In her petition, Senator Olujimi asked the tribunal to nullify Adeyeye’s victory on the grounds that the election was marred by massive irregularities.

In her written address, the petitioner claimed that the election was not conducted in substantial compliance with the provisions of the Electoral Acts, having been allegedly fraught with all manners of irregularities.

The tribunal in its judgment nullified elections in some polling units and declared Mrs. Olujimi the authentic winner of the polls.

Dissatisfied with the tribunal judgment, both Adeyeye and His party, APC filed a petition at the Appellate Court subsequently asking it to set aside the ruling of the lower court.

However, while delivering a unanimous judgement on Wednesday in Kaduna state, Justice Uzor Anyanwu upheld the judgment of the tribunal and ordered INEC to issue a fresh certificate of return to Senator Biodun Olujimi.

Some Pensioners in Rivers Protest After Seven Days Ultimatum