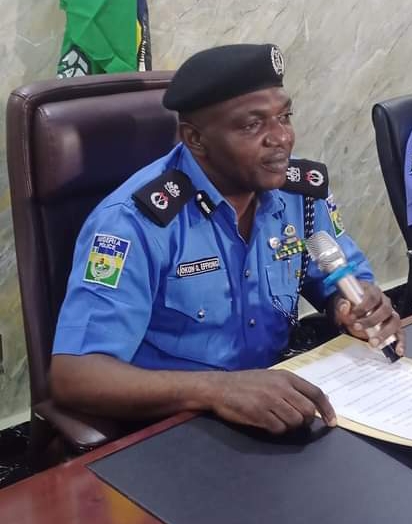 In the few seconds video the victim, Rhino Owhorikire, an ardent supporter of Atiku Abubakar, who looked traumatized after torturing him, he was heard denouncing his support for Atiku Abubakar in Ikwerre Local Government Area of the state.

“I hereby denounce my support for Atiku Abubakar in Ikwerre Local Government Area, which is the territory of Governor Nyesom Wike, I will stop supporting Atiku Abubakar until the Governor so directs”.

CP Effiong Okon’s arrest order was contained in a signed statement by the Spokesperson for the Police Command, SP Grace Iringe-Koko said “Orders for the Perpetrators of the heinous crime that is currently trending on social media, in which one Rhino Owhorikire was allegedly tortured and forced to denounce his support for a particular politician”.
“The CP warned that the act is in contravention of his Fundamental Human Rights and negates the provisions of section 128 (b) of the 2022 Electoral Act.

“Therefore, those arrested will be investigated, and if found culpable will be charged to court accordingly, please”.

Recall could be made that just a few days ago, the Commissioner of Police, held a meeting with leaders of the Political parties and their candidates where he warned against violence, thuggery, breach of the rights of people to hold different political views.

He had vowed that based on his human rights advocacy the command under his watch will not tolerate abuse of the rights of the people, either by Police officers or individuals.