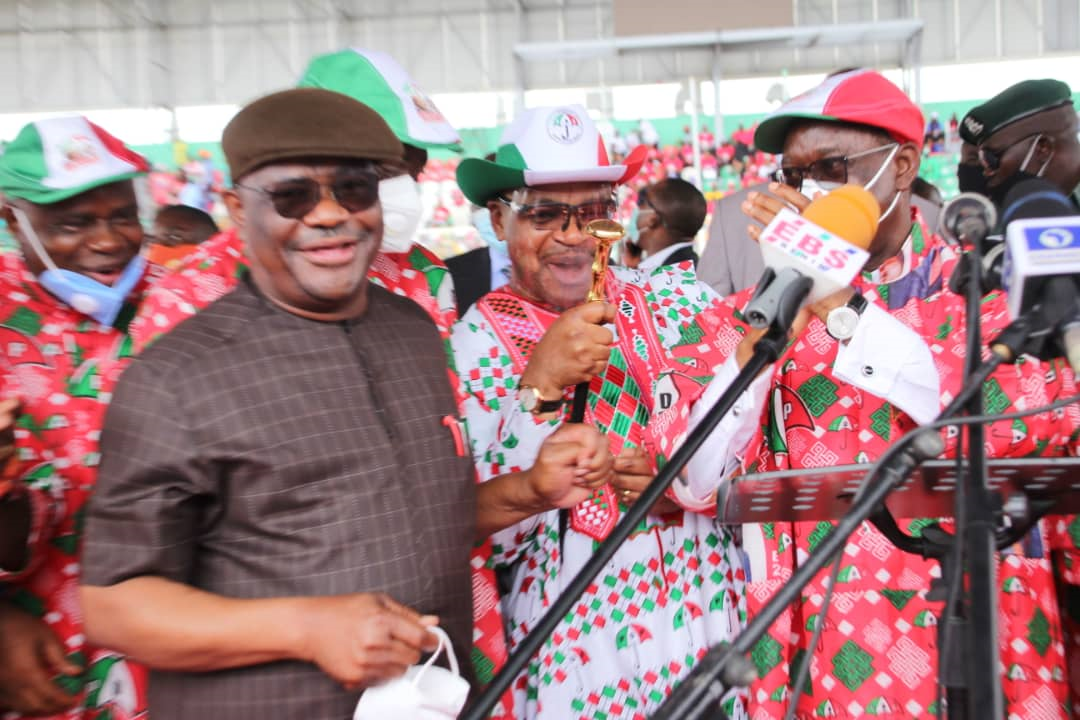 *Urges Edo electorate to be vigilant and defend their votes.

The PDP National Campaign chairman who is also the Governor of Rivers State made the assertion at the Grand Finale of the Edo PDP Campaign  held at the Samuel Ogbemudia Stadium in Benin City.

Governor Wike said the convincing evidence on ground has shown the general acceptance of the party by the electorate.

He stated that with the achievements of the last four years, it would be impossible for Governor  Obaseki not to be declared the winner.

The Governor however urged Edo people not to take things for granted but turn out in large numbers to vote the candidate of PDP.

“By the grace of God, the election has been won by Governor  Obaseki. That does not mean that you’ll go and sleep. Everybody that wants to fight godfatherism should come out to vote.

“Use Edo election to end godfatherism.  Make sure you vote and be vigilant too.

“I agree with the Independent National Electoral Commission (INEC) that  the election will be free and fair. Even the Inspector General of Police has promised that nobody will rig the election. But do not leave the polling units after casting your votes.

“Follow the votes to the Collation Centres . Do not go until INEC has announced Godwin Obaseki as the winner,” he said.

National Chairman of the Peoples Democratic Party (PDP), Prince Uche Secondus described the Edo election as a special one.

He said the election would determine the status of elective democracy in Nigeria that is devoid of rigging.

“Let there be more restrictions for election riggers. Just like United States has done,  I call on other democratic countries of the world to rise to protect Nigeria’s democracy.

“We all know that Obaseki is a performing governor. He has impacted the  lives of Edo people. Let their will prevail.  Edo people should resist all forms of godfatherism,” he stated.

In his speech, the Chairman of PDP Governors’ Forum, and Governor of Sokoto State, Alhaji Aminu Waziri Tambuwal urged Edo people not to sell their votes.

“I hear somebody said he will come to Edo with bullion vans. Stand firm and do not sell your votes.

“I appeal to INEC to conduct free and fair election. There should not be intimidation of the electorate.

“Stay at your polling units.  Ensure your votes are counted. Vote for continuity,” he stated.

On his part, the Chairman of South- South Governors’ Forum and Governor of Delta State, Governor Ifeanyi Okowa said nobody can cheat PDP of its votes because it is a majority party in Edo State.

” We are not afraid.  Nobody will change the results or cheat us on Saturday.

“You have done extensive campaign, from ward to ward. Pick your PVC on Saturday, go to your polling units and cast your votes for PDP,” he said.

Former Vice Presidential Candidate of the PDP, Peter Obi also spoke and urged Edo electorate not to vote the APC candidate for the sake of Nigeria.

According to him,  we want Nigeria to be good and people like Obaseki are trusted.

The mega rally was also attended by the Governor of Bayelsa State , Douye Diri, and his Akwa-Ibom State counterpart, Emmanuel Udom.

Other dignitaries that accompanied the Rivers State Governor were  the Former Governor of Rivers State, Sir Celestine Omehia, Former Deputy Speaker of the House of Representatives, Rt. Hon. Austin Opara and the Former Minister of Transport, Chief Abiye Sekibo.

The PDP National Campaign chairman who is also the Rivers State Governor, Nyesom Ezenwo Wike, at the Grand Finale of the Edo PDP Campaign  held at the Samuel Ogbemudia Stadium in Benin City.