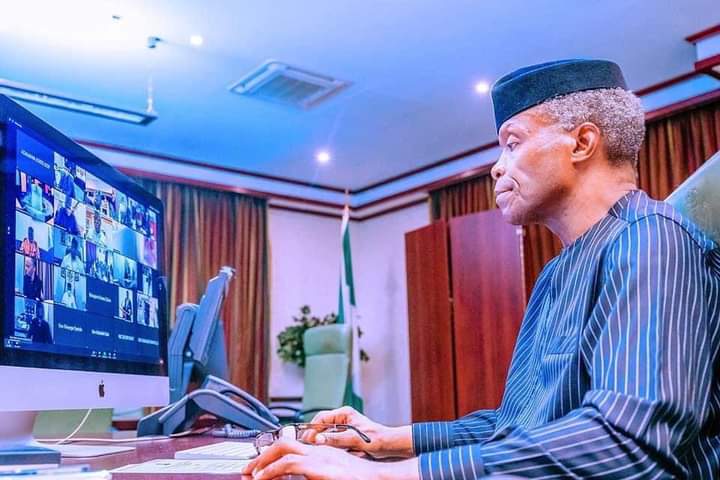 COMMENDS NIGERIAN POLICE, SECURITY AGENCIES ON HANDLING OF DISTURBANCES IN SOME STATES

After more than four hours of deliberations at an emergency meeting of the National Economic Council today, a resolution has been reached by the Council that the deeper reasons behind the ENDSARS protests and its fallouts should be addressed by both the Federal and State Governments.

To this end, a Council committee to engage the youths, representatives of Civil Society Organizations, religious and traditional leaders, on employment, social safety net programmes, and national unity among other key issues of concern has been constituted composing governors representing the six geopolitical zones.

The Committee would be chaired by the Vice President who presided over the meeting attended by the Governors, FCT Minister, Central Bank Governor, Inspector General of Police, representatives from the Military, the Directorate of State Security, and the National Human Rights Commission.

The Committee which is to commence work immediately will develop a comprehensive framework under the auspices of the Council that would coordinate joint actions and steps to be taken by both the Federal and State Governments to examine the fundamental issues underlining the protests and arrive at effective solutions, including how to enhance Nigeria’s national security.

While supporting President Muhammadu Buhari’s commitment to a complete overhaul of the nation’s security services, NEC also commended the Nigerian Police and Security agencies for their handling of the disturbances in some States of the Federation while also noting its unequivocal belief that most members of the Nigerian security personnel are law-abiding and are capable of restoring law and order in the country.

Below is the communique issued at the end of the Emergency NEC meeting today:

Rising from the Emergency Meeting of the National Economic Council (NEC) held today, Monday, 26th October 2020, members commiserated and expressed sincere condolences to all those who have been injured, suffered the death of a loved one or lost property since the hijacking of the EndSARS demonstrations by criminals and hoodlums across the country.

The Council observed the low morale of security operatives during the period and members resolved to commend the Nigerian Police and all the security agencies for their handling of what is clearly an unprecedented problem.

Council affirmed an unequivocal belief and assurance that most members of the nation’s security personnel are law-abiding and are capable of restoring law and order in the country.

NEC also supported President Muhammadu Buhari’s commitment to a complete overhaul of the country’s security services by improving the capacity of security officers across the rank and file while providing them with the necessary equipment to carry out their jobs effectively.

NEC enjoined the CACOVID leadership to come out with an independent statement on the status of the distribution of palliatives donated to States which should clearly explain the circumstances behind the delay in the distribution of food items domiciled in warehouses across the country.

Council reviewed the activities of the Indigenous People of Biafra (IPOB) and other secessionist groups, stressing that these subterranean and violent tendencies must be quickly addressed given that they have continually hijacked demonstrations and caused mayhem and lawlessness across parts of the country.

Council established that economic issues underlie what the country has gone through in the last few weeks. Good governance and improved service delivery remain the fundamental panacea to social tensions in the country, and social welfare must be given greater priority in the first instance.

Council decried the irresponsible use of social media in fueling misinformation and increasing social tensions.

Council agreed to embark on an objective framing of a new security and stability architecture for the country supported by the development of a framework of engagement with the youth, civil society and religious leaders; a framework for national unity; a framework to engage with security agencies that will devolve more control to State governors who are the chief security officers of their states; a framework for federal support to provide compensation for those who have incurred losses in the last few weeks and a framework for social security to deal with the problem of unemployment and poverty in the country.

A Joint Committee was consequently set up by the Chairman of Council, Vice President Yemi Osinbajo, SAN, to work with State governments represented by the Governors of Ebonyi, Ondo, Niger, Delta, Borno and Sokoto States to implement the resolutions of the emergency meeting.