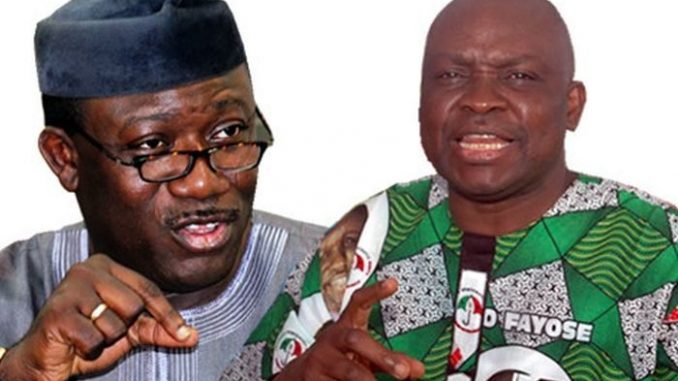 We view with amusement and consternation the vituperation of Ayo Fayose against Adeyeye and Ojudu that they are not welcomed in PDP.

In a sane clime, Fayose ought to bury his head in shame and apologize to the Ekiti people over his four wasted years of reign of terror and malfacense instead of dancing naked in the market square displaying his low level of intelligence and education.

One wonders if Fayose, a political prostitute who had tasted PDP, ANPP, AA, LABOUR and back to PDP as a prodigal son and became the destroyer and undertaker of PDP that well meaning Ekiti people toiled to build while in wilderness could claim to be the new owner of the party.

When did Fayose suddenly becomes the spokesperson of APC?.

A meddlesome interloper seeking relevance in order to seek soft landing from Fayemi.

Fayose, your advice to Fayemi is unwanted, ill timed,full of biles and hatred. Leave APC to solve her own problem in a family way
.
Concentrate on the problem of your party with your crooked ward executives that is before the court of law..

Fayose is not in a position to determine the admission or otherwise of any person to the PDP. He is not the founder or the owner of the party. He is the major cause of the current misfortune of the party in the state. His senseless vituperations against these two great sons of Ekiti shows clearly that he is still in chains in his egomaniac prison.