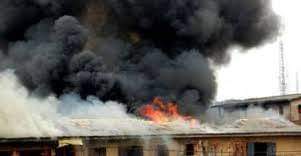 The premises of the Federal High Court in Abakaliki was in the early hours of Tuesday up in commotion as some of the buildings were set ablaze by yet to be identified hoodlums.

Police Public Relations Officer (PPRO) of Ebonyi, Obianuju Loveth Odah, while confirming the incident noted that no live was lost in the incident, but that blood stains were seen on the wall of the court.

The Police Public Relations Officer (PPRO) of Ebonyi said that no arrest had been made.

She however, said that the command had began investigation to unmask those behind the attack with a view to bringing them to justice.

“Hoodlums in the early hours of Tuesday wielding dangerous weapons stormed the federal high court premises and burnt part of the building.

“Though no arrest has been made, but investigation is ongoing.

“The Commissioner of Police, Mr Aliyu Garba, has promised to arrest the perpetrators and bring them to justice,” Odah said.

Meanwhile, a detachment of the Nigerian Mobile Police (MOPOL) has been drafted to the area to secure the court premises.

Surrender to criminals is not an option- El-Rufai