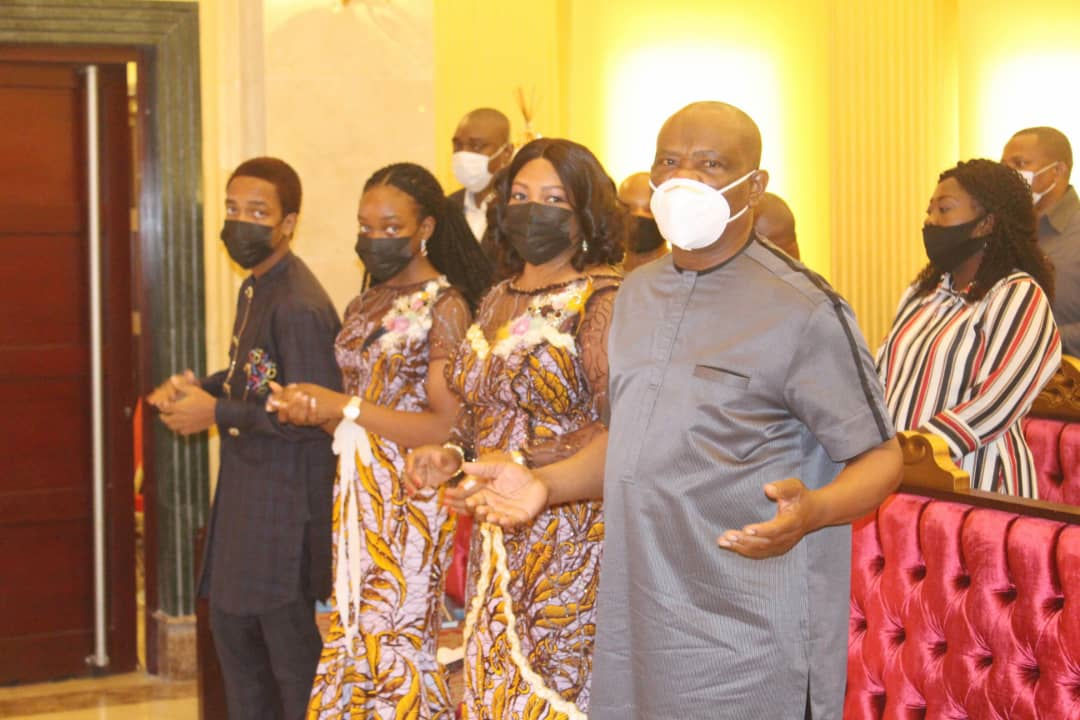 Governor of Rivers State, Nyesom Ezenwo Wike, his wife,  Hon Justice Eberechi Suzzette Nyesom-Wike and their children attended the first Sunday Church Service of the year, 2021 with some members of the State Executive Council also in attendance.

The Church Service was held at the Governor’s private residence, along Ada George Road in Rumuepirikom of Obio/Akpor Local Government Area.

In press Statement endorsed by Governor Wike’s media aide said the Governor read the only Bible lesson of the Service from the book of Psalm 122 verses 1-9 with some of the verses reading thus: “I was glad when they said unto me, let us go into the house of the lord.

“Our feet shall stand within thy gates,  O Jerusalem. Peace be within thy walls, and prosperity within thy palaces.

“For my brethren and companions’ sake,  I will now say,  peace be within thee because of the house of the Lord our God, I will seek thy good.”


In his sermon, Venerable Richard Okpara exhorted the congregants to desire the characters of the personal life of Jesus Christ than to posses the power to perform spectacular miracles,  cast out demons and to control the forces of nature.

He said Jesus Christ who started his ministry at the of 30, did not condemn anybody to death and sufferings, but proclaimed liberty to the captives,  healing to the broken hearted and offered salvation.

Venerable Okpara urged people in leadership to be wary of those who come to them singing their praises always in order to get them distracted from their commitment, which eventually make them to become self conceited.

According to him, they need to know the enormity of their responsibilities and put their trust in God not in men, who alone is able to lead them to do right always.

He also noted the importance of new year resolutions that some of those in attendance may have made, but reminded them that at a point in life with their accomplishments, they need the prayers for long useful life more.

But such long life,  he said, is meaningless without the resolve to impact society positively by giving scholarship to the indigents and watch them become fulfilled in life. He urged them to also build a befitting Church in their villages for God in gratitude.

Governor of Rivers State, Nyesom Ezenwo Wike, his wife,  Hon Justice Eberechi Suzzette Nyesom-Wike and their children during the  first Sunday church service of the year, 2021 which held at their private residence in Rumuepirikom of Obio/Akpor Local Government Area.