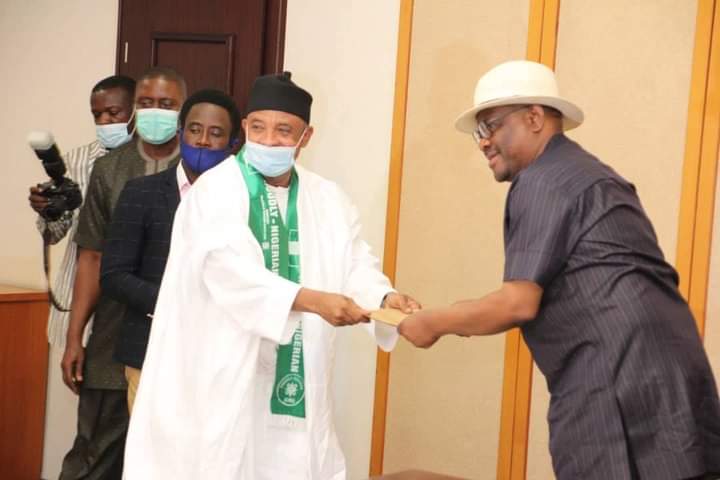 Governor Nyesom Ezenwo Wike, says he has no regret proscribing the outlawed Indigenous Peoples of Biafra (IPOB) in Rivers State due to his belief in the unity of Nigeria.

He said, Nigerians must at all times rise to protect and defend the interest of the country, and not allow parochial, sentimental politics to destroy the country.

The governor stated this when a delegation of Coalition of Northern Groups (CNG) paid a solidarity visit to the Government House, Port Harcourt , to commend him for his untiring efforts and dedication to protect the interest of ethnic groups living in Rivers State.

The governor said the EndSARS protest was peaceful in the state until IPOB hijacked it, and committed arson by killing 6 Army officers, 4 Police officers, burnt police stations and courts.

According to him, he cannot seat as governor and watch such lawless acts to be perpetrated by a people that has been proscribed by the federal government to cause ethnic war.

“Without any apology, I am a true Nigerian. I believe that things must be done properly in a way that every component part of this country will be satisfied.”

Governor Wike, reiterated that he has never been against any particular ethnic group living in the State, including every law abiding Igbos. He however, maintained that as a governor he cannot tolerate a situation where some misguided persons under the guise of IPOB would unleash attack innocent Nigerians in Rivers State.

He explained that if the State Security Council was not proactive to impose curfew in the entire Oyigbo Local Government Area, the situation would have degenerated to war between Igbo and Hausa community residing in the area. According to him, the decision forestalled ethnic reprisal attacks that would have led to total breakdown of law and order in Oyigbo local government area and parts of Diobu axis of the State capital.

Governor Wike, said all Nigerians must stand against injustice at all times no matter who is involved and be determined to work for the interest of the country. He further asserted that he is a true Nigerian and will continue to work for its indivisibility.

CNG spokesperson, Abdul-Azeez Suleiman, said they were in the State to express their profound gratitude to the Governor for his leadership, sacrifice, statesmanship, and unwavering commitment deployed in protecting Northern communities from the violence and violation of their rights and dignity during the mayhem in Oyigbo.

“Your concerned promptness in redeeming the solemn pledge of N200 million to the families of security personnel affected negatively by the flip side of the protests is certainly reassuring. We reasonably believe that if the federal authorities were to emulate the wisdom of offering such incentive to our troops on the front line, it would heighten their morale which is a present very low.

The CNG craved the Governor’s indulgence as the caring and compassionate leader, to extend the same magnanimity to the unfortunate victims of the ugly side of the protests from Northern Nigeria to enable them start over.

“Similarly, we are impressed by your level of rare courage and uncompromising stance in the repudiation of the activities of the proscribed Indigenous Peoples of Biafra (IPOB) and it’s fugitive leader Nnamdi Kanu in your state. this without doubt, is a commendable feat, because if leaders today need to hear the truth, they should be told that most of them have lost the energy and some of the courage to take responsibility in the interest of national sovereignty , national security, national peace and constitutionalism.”

The delegation was led by the chairman board of trust of CNG, Nastura .A. Sheriff.