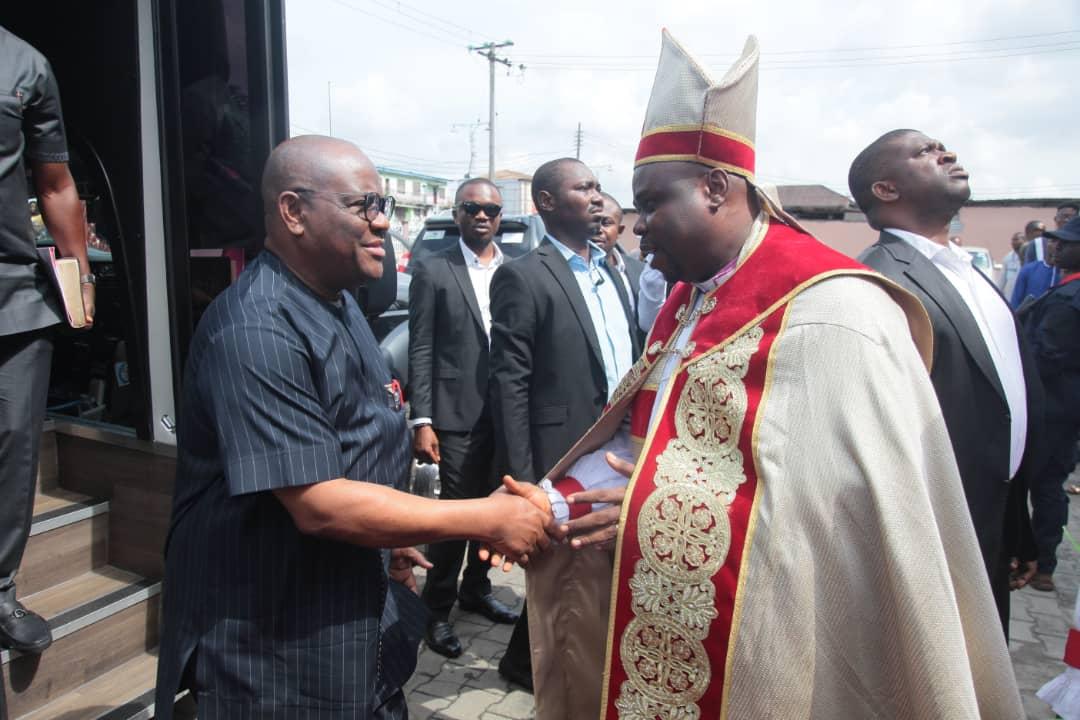 Rivers State Governor, Nyesom Wike, has vowed to step on the toes of people as he rolls out environmental sanitation policies that will ensure that the state capital, Port Harcourt is kept clean and healthy.

“You people are happy you voted me in as your Governor for my second tenure. I am also happy. But I will soon disappoint some people, because many of our people generate wastes and empty them on the median and expect government to pack them. We will pack them but you have to pay.”

Recall could be made that during his inauguration address on May 29 for his second tenure in office, Wike had declared a state of emergency on environmental sanitation in the state.

He commended the Anglican Diocese of Niger Delta North led by its Bishop, Rt. Rev. Wisdom Budu Ihunwo, for coming up with the proposed investments on building of a School and establishment of table Water Company that will not only generate revenue for the Diocese and be self reliant, but give employment to competent professionals.

On behalf of the Rivers State Government, Governor Wike donated N100 Million towards the establishment of the proposed School and a table water company.

Wike said “With your commendable initiatives, I urge other denominations to emulate the Diocese for trying to invest because besides soul winning, you are also obeying God by going into investments because God also approves of it.”

He also frowned at Clergymen who allegedly got involved in ballot snatching during the last general election. “How do you imagine a cleric hijacking ballot boxes? When we say that Christians should participate in politics, it is not for them to do illegal things.

“The church should discipline members who are involved in Electoral Malpractice.  This will deter others planning to do same”, he said.

He reiterated his call for Christians to be involved in active politics to stop the emergence of unqualified leaders in the country.

The Governor said that the bad economy that has crippled the country at the federal level is due to the fact that unqualified people are controlling that level of government.

While commending the creativity of the diocese for investing in productive ventures, Governor Wike announced support for the Church Projects.

In a sermon, Anglican Bishop of Mbamili Diocese, Rt. Rev Henry Okeke said Christians must use their positions to propagate the gospel and improve the lives of others.

In the sermon anchored on the theme of the Synod “Occupy Till I come” the guest Preacher, the Bishop of Mbamili Diocese, Rt. Rev. Henry Okeke, admonished that in whatever positions individuals find themselves, whether in religious or secular world they should know that such positions are held in trust for God which they must give account any time God demands of their stewardship.

He said the success of a man should be judged by the lives of those he was able to impact on.

He warned Christian Leaders never to bow to pressure and intimidation, as they have a duty to help in defending the faith from the forces of darkness.

The cleric said Christian leaders who find themselves in governance, civil service and business should use their positions to defend the future of their communities.

READ ALSO: THE MANY POLITICAL BATTLES AMAECHI HAVE HAD IN HIS SUCCESSFUL POLITICAL CAREER

The 3rd Session of the 8th Synod of the Anglican Diocese of Niger Delta North witnessed the rendition of soul lifting hymns and awards to deserving members.

In his closing remarks, Bishop Wisdom Budu Ihunwo, commended Governor Wike for his presence and support for the synod delegates, parishioners of the Diocese for the successful 2019 Synod.