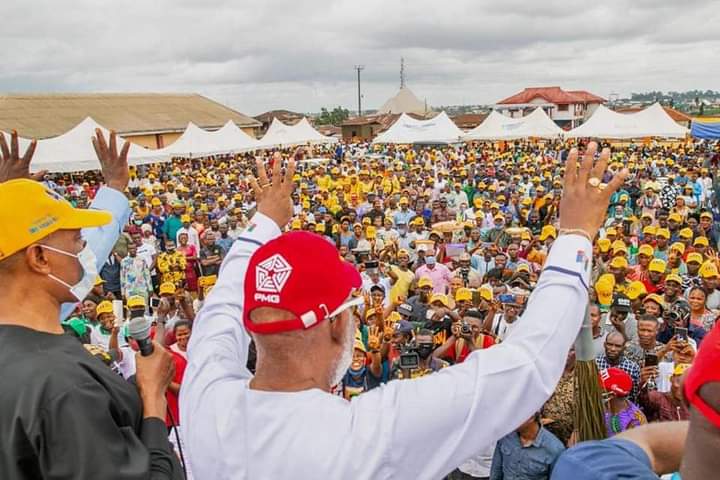 The governor of Ondo State, Rotimi Akeredolu, has said that his deputy, Agboola Ajayi, is wasting all resources acquired from the state to give former governor Olusegun Mimiko political resurrection.

While Mr Akeredolu is the candidate of the ruling All Progressives Congress (APC) in the coming October 10 governorship poll, Mr Ajayi is the flag bearer of the Zenith Labour Party (ZLP), a party promoted by Mr Mimiko in the state.

Mr Akeredolu and Mr Ajayi have been at loggerheads for months over election differences.

The incumbent deputy governor has the blessings of Mr Mimiko

But speaking on Arise TV interview on Monday, Mr Akeredolu disclosed that his predecessor and deputy betrayed him. He also noted that the coming together of the duo cannot stop his victory.

“Does it affect me, does it make me nervous? The answer is no. I am confident of my victory. Who are these people? They were never my allies.”

“I ran against him (Mimiko) in 2012. I ran against Jegede in 2016 with Mimiko supporting him. I have treated him fairly. Mimiko has his own trait, if Agboola with all he did finds solace in Mimiko, it is because they have the same trait, they are people prone to betrayal.”

Mr Akeredolu said that Mr Mimiko has no political strength to win his local government in the state. He also said Mr Ajayi would only “waste his money on the former governor’s political resurrection.”

“Mimiko is not a political force anywhere, he left governor’s office, and tried the senate, he did not win. He did not even win his local government, he is a spent force.