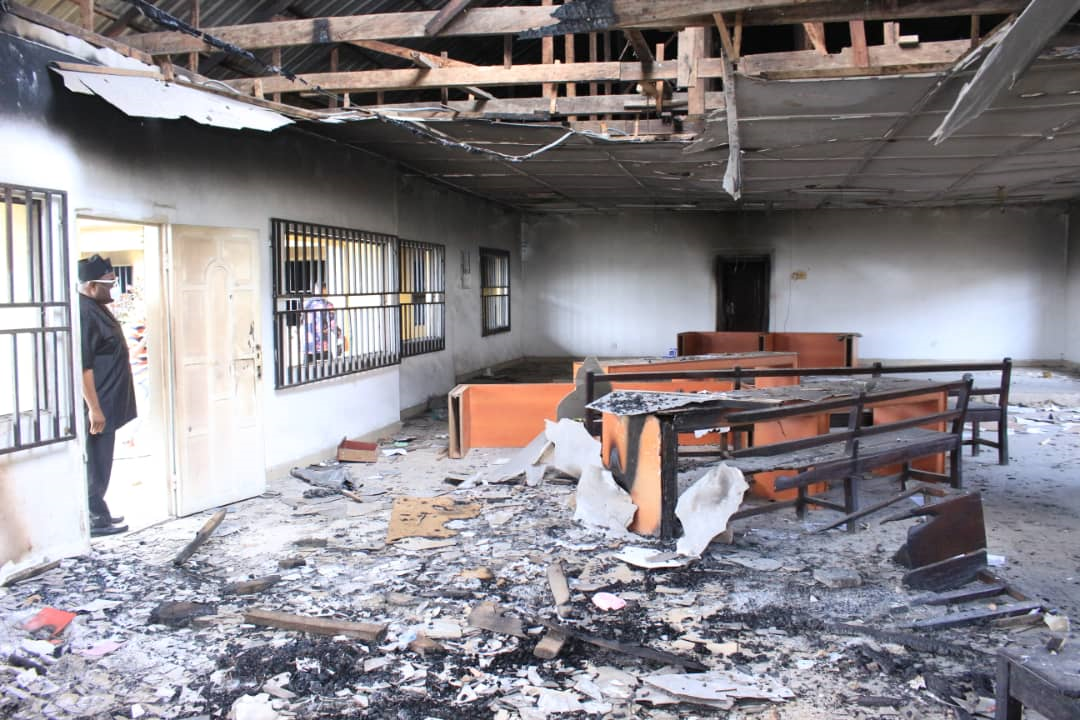 ...As Dele Momodu, Publisher of Ovation magazine and his team visit Oyigbo

“Now, IPOB members have killed some soldiers, all of them have ran away. The Army is investigating and fishing them out”—Oyigbo Chiefs.

Chiefs have implored the Defence Headquarters not to withdraw soldiers deployed to restore peace in the Oyigbo  Local Government Area of Rivers State in order to prevent remnants of the Indigenous Peoples  of Biafra (IPOB), from regrouping.

In press statement from government house, Port Harcourt states that the chiefs under the aegis of Ogbakor Oyigbo, have also urged all those who deserted Oyigbo to return as normalcy has been restored.

The appeal to the military authorities was made when the Publisher of the Ovation International Magazine, Chief Dele Momodu, visited Oyigbo, to assess the situation in the area ground.

A high chief, Eze Ukwu III, Louis Okorie, told Momodu and his delegation that the community chiefs  do not approve the withdrawal of soldiers from Oyigbo. He expressed serious concern that if soldiers are withdrawn from Oyigbo, IPOB anarchists would unleash violence in the area.

” The Ogbakor Oyigbo General held a meeting here yesterday and said they will not allow the removal of soldiers from Oyigbo.  On 12th of November, 2020 we met with  the Local Government Chairman, Gerald Aforji,  informing him of our plight. We don’t want  Army to be withdrawn for the benefit of Oyigbo people. We need to be careful of the remnants of IPOB terrorists. We thank Rivers State Governor, Nyesom Ezenwo Wike for imposing of curfew which has calmed down the situation in Oyigbo.”

In the same vein, High Chief, Lisbery Onyegorom, narrated that indigenes of Oyigbo were astounded by the wanton destruction unleashed on their community by members of the outlawed, IPOB.

“We were surprised by the level of destruction by the IPOB. We are Rivers State and Niger Delta people. Our people are not members of IPOB . I am not aware of any Oyigbo indigene who is a member. We don’t allow that.

“Now, that they  have killed some soldiers, all of them have ran away. The Army is investigating  and fishing them out . Most of the IPOB members arrested have given vital information about the remnants.

“We are in support of the Governor’s ban on IPOB activities across Rivers State and hoisting of IPOB Flag.”

Onyegorom frowned at allegation of extrajudicial killings levelled against Nigerian Army by some persons working for some extraneous forces playing petty politics with the Oyigbo issue.

” We are solidly behind our Governor’s effort to maintain peace in Oyigbo. The Governor did not say, go and kill people. The Army came on a rescue mission . That’s what they came for. It is the deployment of the Army that give us comfort to remain here. For now, we hear of threat to protest again. Army is going no where. Let the Army stay until we are sure of peace in Oyigbo.”

” Those who ran away should come back. The Army is not chasing any body. Army is not killing any person. Let the Army stay, until we are sure peace has returned.”

On his part, the Chairman of Oyigbo Local Government Area, Prince Gerald Oforji said most of the negative information peddled in the media on the situation in the area are unfounded.

“Today, I am very happy for the visit by the Ovation family to assess the wanton destruction carried out on the 20 October by the IPOB. Today ,they have come to assess and see things for themselves based on lopsided information they have been getting concerning Oyigbo. I believe with what they have seen today, the world, can confirm that most of those negative information posted against Oyigbo, against Rivers State, are unfounded.

Momodu, described as unfounded and untrue insinuation in some quarters that  the military have been killing innocent persons in Oyigbo.

“The way they describe Oyigbo as if there is massacre, there is no massacre going on. I have not seen any massacre. I believe, we have moved round extensively, nobody has told me not to move to anywhere. A lot of people have challenged me that I can not come to Rivers and visit Oyigbo.

“So, I am here. For me, it is a mixture of sadness and joy. Joy, that am able to come here in peace, because the impression I got was that nobody could come here at all; that everywhere has been taken over by  the military and people are been massacred. I have gone round. I went to the market, I have gone to the police headquarters that was allegedly burnt down.”

Some of the Police Stations destroyed by IPOB in Oyigbo

2023: VOTE US OUT IF YOU’RE TIRED OF OUR FACES, SENATE PRESIDENT, LAWAN TELLS NIGERIA