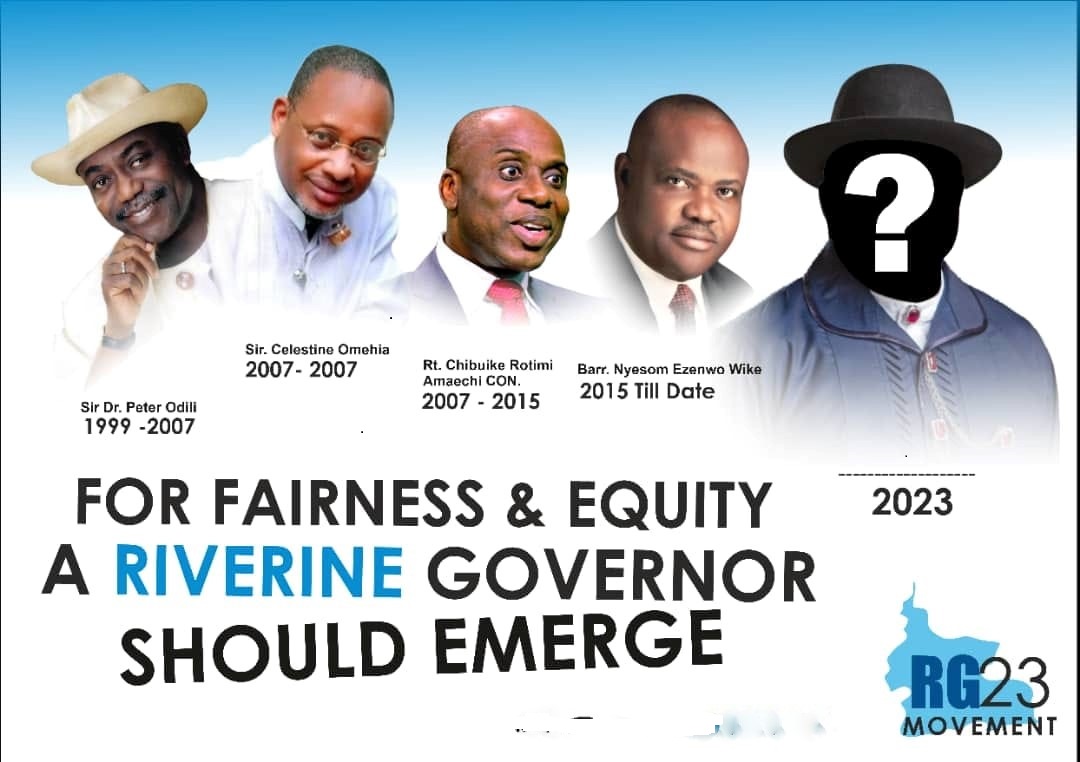 The campaign for a Rivers state Governor in 2023 of riverine extraction has just begun and the search for a new face in the political landscape of Rivers state has also begun in earnest. Those proponents of a Riverine Governor come 2023 are of the opinion that since the inception of the present nascent democracy in 1999 to date the Brick House has been occupied by Upland citizens while the riverine component have not taken a shot at the Governorship slot since the creation of Bayelsa state out from Old Rivers state. First Dr, Peter Odili a native of Ndoni district of Ogba/Egbema/Ndoni Local Government area occupied the office of executive Governor from 1999 to 2007 while barrister celestine Omehia a native of Ikwerre Local government Area an upland community briefly occupied the Governor’s mansion from May 29th 2007 to 25th of October 2007. His cousin Rt. Honourable Chibuike Rotimi Amaechi took over from Omehia on 26th of October 2007 to 29th of May 2015. As if that is not enough, another Ikwerre ethnic nationality man from Obio/Akpor Local government Area and upland community chief barrister Nyesom Ezebunwo Wike took over from Amaechi on May 29th 2015 to May 29th 2023. It is on this note that the incumbent Chief Executive Officer CEO of Heritage Bank Ltd Ifie M.P Sekibo fcb, fcIb Ph.D. better known as Ifiesimama Melvin Precious Sekibo is being seen by his admirers as suitable candidate for the next occupant of the executive office of Governor of Rivers state come May 29th 2023.  The catch-up campaign phrase for the R23 Movement as they are known is “For Fairness And Equity——-A Riverine Governor Should Emerge”. And the Honourable for Transportation Rt. Hon. Chibuike Rotimi Amaechi is a firm believer in power shift in the election of All Progressives Congress-APC Governorship candidate come 2023 Governorship election in Rivers state.

The Heritage Bank Plc CEO IFIE M.P SEKIBO is in his midlife having been born on  April 18, 1965 and stands the chance of unleashing his strength and vitality which the office of executive Governor requires. Another financial guru ATEDO PETERSIDE of IBTC/Stanbic bank fame who recently retired from active banking career is another Riverine born citizen of Rivers state although he is aging graciously as the rigours and vitality and stress associated with the daily challenges of running an Oil and gas rich state like Rivers state may after all be a setback to ATEDO PETERSIDE who hails from Opobo/Nkoro Local Government an Island riverine community. The two aforementioned Bankers have no public avowed pronouncement and affiliation with any known political party in Rivers state as they have not held any political position except Atedo Peterside whose administrative knowledge in being part of National Constitutional Conference and other adjoint services he had done for his fatherland may be smart enough to auto-pilot the affairs of Rivers state should he throw in his weight in the murky waters of politics in Rivers state Governorship race come 2023.

Whereas Peoples Democratic Party’s Chief Theophilus David Briggs former Commissioner during Dr. Peter Odili’s administration and Chairman Secondary Schools Management Board in Barrister Nyesom Ezenwo Wike’s administration may after all apply his knowledge as a graduate of Economics from University of Port Harcourt in driving and piloting the affairs of Rivers state as he is a native of Abonnema in Akuku Toru Local Government Area of Rivers state.