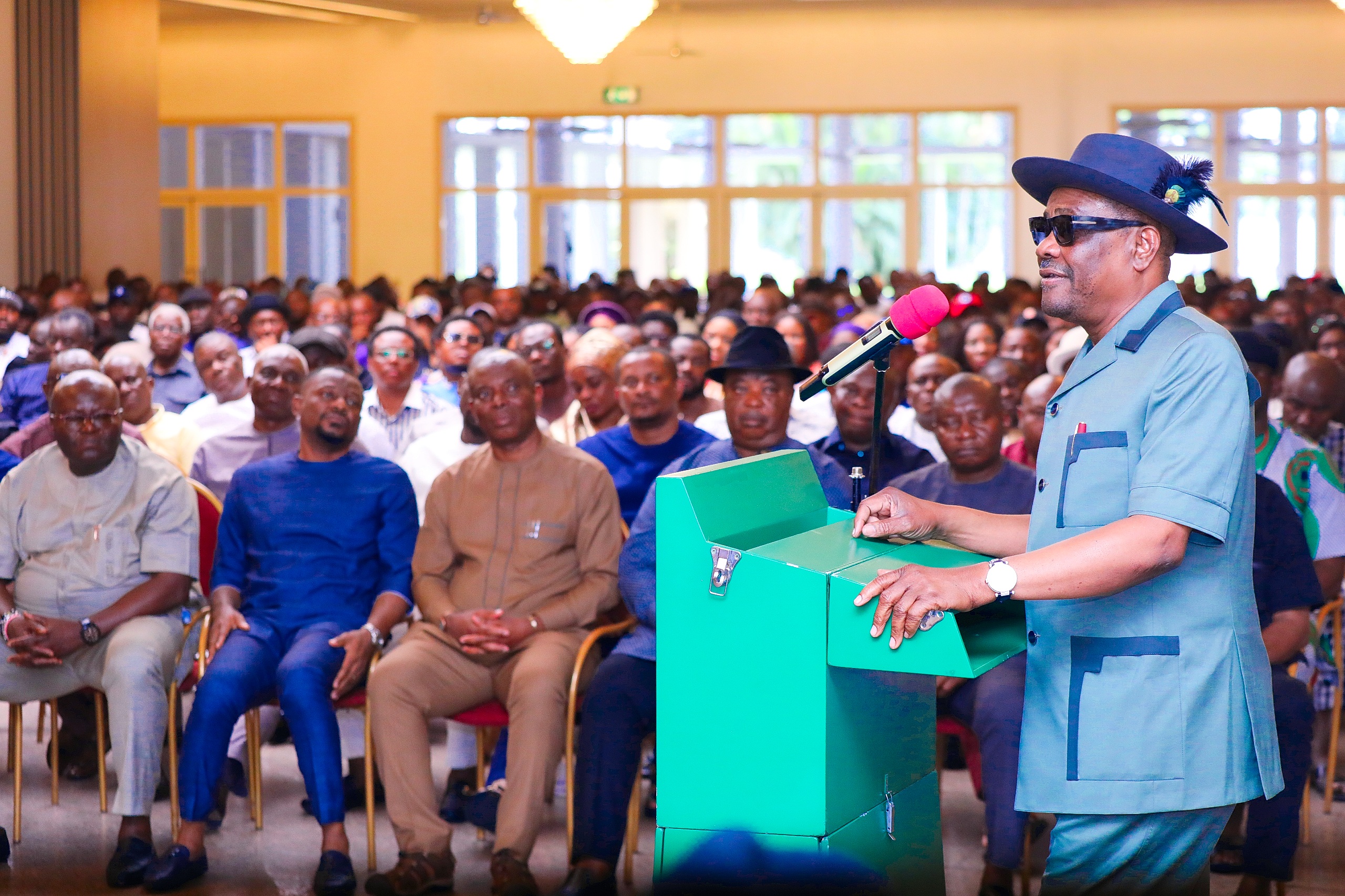 Rivers State governor, Nyesom Ezenwo Wike has declared that he will not leave the Peoples Democratic Party (PDP) for anybody and whatever cause.

The governor stated that he was rather interested in preserving the sanity of the party and will stay back to fight for the enthronement of unity, inclusivity, equity and peace in the PDP.

The governor said he is a man of character, unlike those who cannot keep their words and walked out of the party at the Eagle Square in Abuja in 2014.

“One thing I have always told people is, if anybody is thinking, doing anything to think that we will leave PDP, foul.  We will do the fight in the party. We are not like them, when in 2014 they walked out from Eagle Square. They’ve forgot. They walked out and joined APC. Is it not correct?

“Did they remain to fight inside the party? But we remained, they ran away. Now, there is a fight in the party, we will not run. We will fight it in this party. Those who run away from fight are weak people. We will not. So, everybody should know this is the state where we are. So that nobody tells you all kind of stories.”

Governor Wike insisted that the constitution of the party clearly stated that elective and party offices must be zoned which, should be respected.

Governor Wike wondered why the former PDP BOT chairman will be pressurised to resign and  the PDP national chairman, Senator Iyorchia Ayu is excusing himself from keeping to doing what is right.

Governor Wike recalled how in 2015 the federal government used the military to invade Rivers State, interfered with and even annulled elections, but were resisted.

The governor recalled he made sure the senatorial results for Rivers East was announced that delivered Senator George Thompson Sekibo and that of Rivers West, that produced Senator Betty Apiafi.

Governor Wike regretted that despite the risk taken to deliver them, the same people are now in Abuja plotting against him. He said they won’t succeed because God has blessed him.

The Rivers State governor also clarified that he never promised anybody governorship ticket of the PDP despite the pressure some leaders mounted on him or attempts made to divide the State House of Assembly.

Governor Wike said though he didn’t clinch the PDP presidential ticket, he actually made a good account of himself at the primary.

The governor informed that by next week, Rivers State PDP campaign team will be unveiled and the campaign pattern adopted will be based on each local government peculiarity.

Governor Wike emphasised that all PDP candidates in the State will be returned elected by Rivers people who are satisfied with the performance of his administration.

“We will take all. We are taking all because Rivers people are happy with what we have done in this state. we have not only provided infrastructure, we have also defended the interest of Rivers State.”

He explained that it took courage and firmness for him to protect the interest and assets of Rivers State without compromising it with politics.

Governor Wike explaining that besides securing a refund of money illegally deducted by the federal government over the Police Trust Fund, his administration recovered oil wells wrongly ceded to Imo State and is collecting the accruing revenue from the oil wells in disputed area between Rivers and Bayelsa States.

The governor stated that the federal government won’t be able to use the army and the police in the 2023 election, because Nigerians will vote for political  parties on the basis of their performance.

Governor Wike caution party members who want to be moles and work against the PDP because they were not given the ticket that they sought.

The governor urged party members to be steadfast because God is on their side, and since they have not known defeat, PDP cannot be defeated in 2023 general election in Rivers State.

In his response, State Chairman of the PDP, Ambassador Desmond Akawor said the party in the state has already passed a vote of confidence on governor Wike for the way he has piloted the affairs of the State.

He commended the governor for the consistent delivery of projects, defending the interest of the State, and declared that they will continue to follow the leadership that he provides.