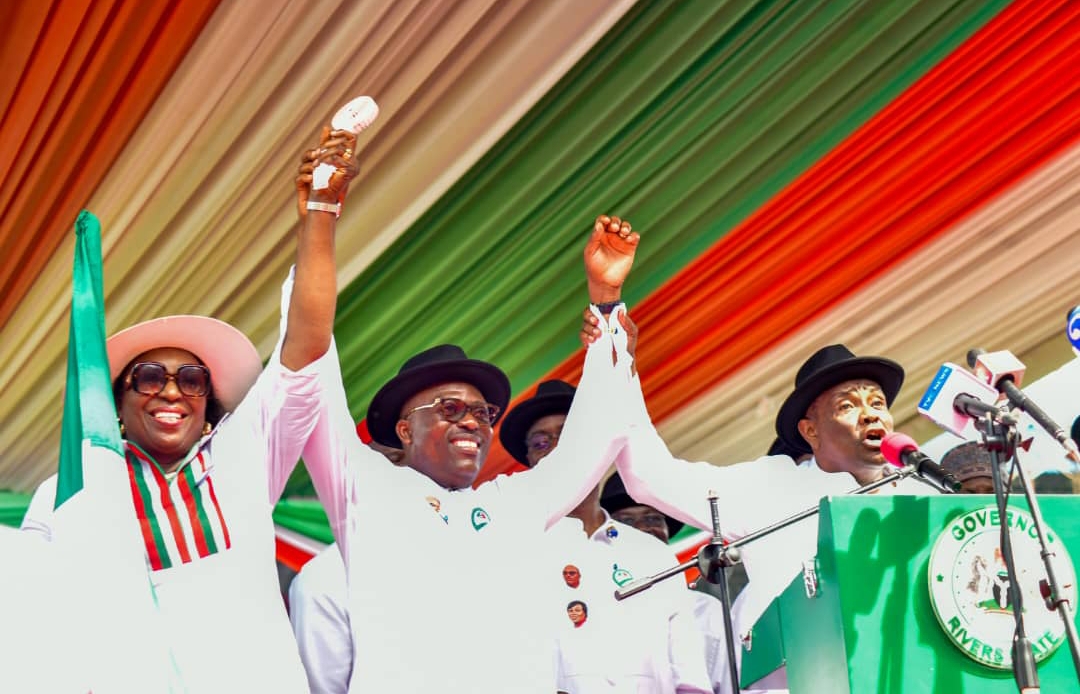 *Iyorchia Ayu, the national chairman of PDP to sue him if he is not corrupt as accused, over the diversion of N1billion, N100million, and money realised from the party primaries.

*Ayu is building a private University from proceeds of corruption

Rivers State governor, Nyesom Ezenwo Wike has declared that he will not support anybody who believes that only they, and not other ethnic groups, can produce the President of Nigeria.

He also vowed that he will not be part of any political campaign led by Iyorchia Ayu, the national Chairman of the party has been accused of corruption.

Governor Wike made the declaration at the Rivers State Peoples Democratic Party (PDP) 2023 election campaign flag-off rally that held at the Adokiye Amiesimaka Stadium in Omagwa, Ikwerre Local Government Area of the State on Saturday.

The governor wondered why anybody could go on national television to deride any tribe, insinuating that they are less Nigerians and therefore, do not qualify, on ethnic basis, to ascend the presidency.

‘My dear brothers of the integrity group, you’ve done well. They have tried to break us, they couldn’t break us and they will never break us.

“But here in Rivers State, I will say it and let the heavens hear me. Let the earth hear me today. I will not support anybody who says that no other person from other ethnic groups can be president. I will not do it.

Governor Wike explained that his stance has nothing to do with the party because he believes in the PDP.

But, he insisted that it is about the identity of people who are Nigerians and therefore, should have equal status, no matter their ethic groups.

The governor said when people do not acknowledge that you exist, there is need to tell such persons that you do exist.

According to him, the people of Rivers State do exist and as Nigerians they can also determine issues about the presidency, and become the president of Nigeria too.

“God, are you alive and they say I don’t exist? I exist. God has never made a mistake in life. He is the one who said where we should come from? It has nothing to do with party. It has to do with my identity.”

Governor Wike challenged Dr. Iyorchia Ayu, the national chairman of PDP to sue him if he is not corrupt as accused, over the diversion of N1billion, N100million, and money realised from the party primaries.

The Rivers State governor, informed that Dr. Ayu is already building a private University from the proceeds of corruption and insisted that such person cannot lead Rivers State to any campaign.

The governor told Rivers people that PDP governorship candidate for the 2023 gubernatorial election is Siminalaye Fubara, and all Rivers people who are satisfied and attest to the quality services he has rendered in office will join to deliver Fubara as the winner of the election.

In his speech, Benue State governor, Samuel Ortom said governor Wike earned their respect for showing exemplary leadership. According to him, all G-5 governors have chosen to work with him since they believe in equity, fairness and justice.

On his part, Enugu State governor, Ífeanyi Ugwuanyi stated his support to the Sim-project which, will consolidate the New Rivers Vision and guarantee continual delivery of democratic dividend to Rivers people.

The Abia State Governor, Okezie Ikpeazu spoke and urged all Rivers people to support to deliver Fubara who will continue in the Wike’s trajectory of growth, development and progress for Rivers State.

Also speaking, Governor Seyi Makinde of Oyo State expressed the hope that Rivers State will continue in their tradition of delivering all PDP candidates as known since 1999.

Arapaja commended the G-5 governors for their unwavering commitment to the party.

On his part, former governor of Ekiti State Ayodele Fayose urged the national leadership of PDP to use the available time to ensure that true reconciliation was achieved, before it is too late.

In his speech, Rivers State PDP governorship candidate, Siminalaye Fubara declared he will consolidate the successes of the Wike’s administration in all sectors when elected into office.

Rivers State PDP chairman, Ambassador Desmond Akawor described Fubara as educated, young and a technocrat who will take the State from where it is now to another height of prosperity.

My governorship bid for all Rivers people, not self-serving – Sim Fubara