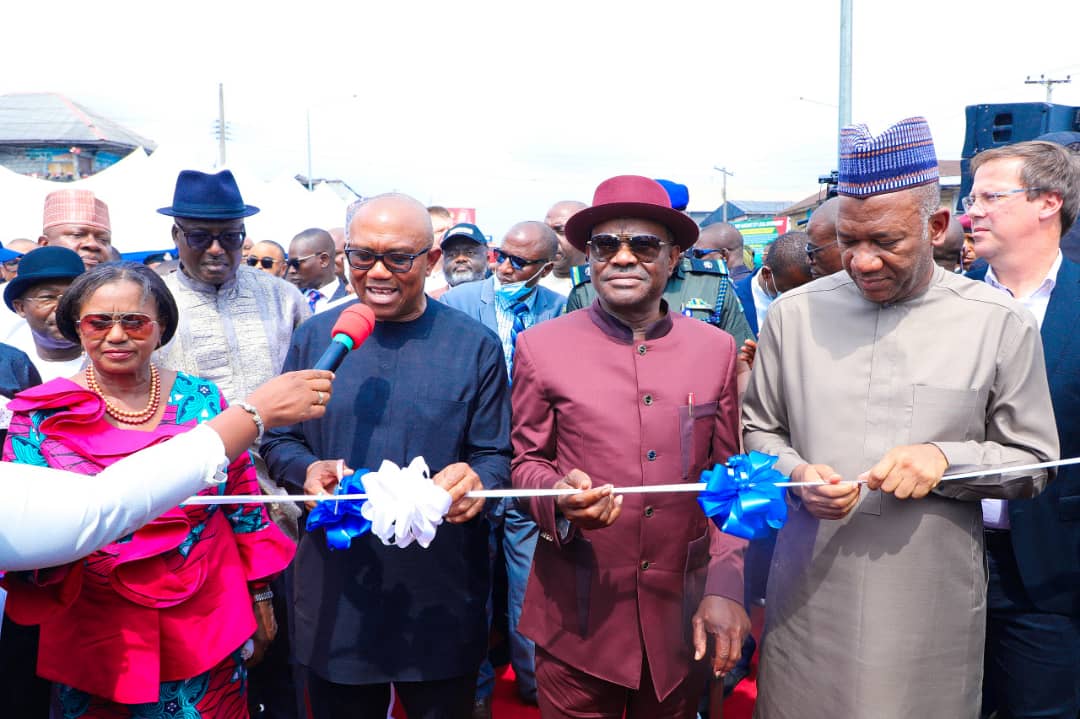 He stressed that the days were gone when people ride on the confidence that because they are from a majority tribe, they will always win election.

Governor Wike spoke at the inauguration of the Nkpolu-Oroworukwo flyover, the 9th so far constructed and completed by his administration.

The Rivers State governor observed that there are so many people who had left office for years and have gathered around a political actor in their desperation to force themselves back to power.

“All they want to do, let us get the opportunity to come back to power. Nigerians, we must open our eyes. You (politicians) must sell yourself; this is me. You must not sell yourself because you belong to a major ethnic group. Every vote in this country will count.

Governor Wike also spoke, making reference to assurances some political actors made during a town hall meeting where they agreed to implement the restructuring of the country.

Our Correspondent reports that Wike was alluding to Atiku Abubakar, the Presidential Candidate of the Peoples Democratic Party, PDP, who had condemned the situation where all the Service Chiefs are people from one section of the country but could not effect such change in PDP.

The governor wondered why he waited for over seven years, until this political season, to begin to speak out against such sessional appointments of Service Chiefs.

“Some people come to tell me support so and so persons and I ask them do you know him? When I hear people go to Town Hall meetings and they say all kinds of things they say. They said they will implement restructuring. They will make sure that every zone will have a member in the Security Council. That, it is not good for one zone to produce all the Security Chiefs. You see that, but it is good for one zone to occupy all party positions. You see how Nigerians are? You see how we are?“

“Those who are threatening me are those who destroyed PDP and made us lose election in 2015. I stood firm in this party when this party was to die. Peter Obi, you were there in the party then.

“I was the one with my friends who supported this party. Those who left the party are the ones coming to tell me that I want to scatter the party when you(they) have scattered the party and made us lose election in 2015. Now we are in opposition. Who put us in opposition?”

Governor Wike said that everybody knows him that he is not a conman, but a straight forward politician who want the best for Nigeria.

The Rivers State governor commended his guest, Peter Obi for leaving the PDP and the frustrations meted at him to pursue his political ambition.

Governor Wike, however, restated his resolve to remain in the PDP, and doggedly fight those he described as vampire, armed robbers and scavengers.

The governor advised all political parties to obey the Executive Order 22 and 21 issued by him. He insisted that any political party that wants to use public school for campaign must obtain permission from the Commissioner of Education.

Governor Wike offered to provide logistic support to Mr Peter Obi whenever he visits Rivers State for his presidential campaign.

The Rivers State governor urged the Labour Party presidential candidate to ignore envious persons from his home State who are hellbent to distract him in his pursuit for the presidency.

Performing the inauguration, Mr Peter Obi expressed gratitude to governor Wike for his large heart to extend invitation to him to open the Nkpolu-Oroworukwo flyover for use by the public.

“What is lacking in our country today is character, competence and capacity. In all these you have shown it as a State governor.”

Obi pointed out that 18 presidential candidates are gearing up to contest the 2023 election but Nigerians are looking for men of character, competence and capacity including those who have used previous opportunities to offer service profitably.

“I assure you of our commitment to build a better Nigeria. our past will not be our future. Those people are our past. I and Datti (Baba-Ahmed) represent the future of Nigeria. And I have told Nigerians, hold me responsible. I know what it takes to turn around this country. I will not give excuse. I will change Nigeria.”

Providing the description of the project, Commissioner for Works, Dr. George-Kelly Dakorinima Alabo said the Nkpolu-Oroworukwo flyover is 993 meters long, with a pavement width on both sides as 7.5 meters each.

Dr. Alabo assured that with the flyover, there will be ease of doing business, reduced traffic congestion in the area and serve as effective diversion of vehicular movement in that part of the city