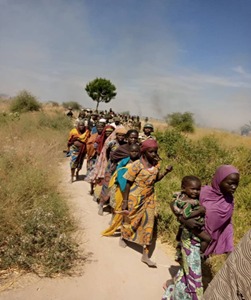 …RESCUE WOMEN AND CHILDREN AND DECIMATE OTHER CRIMINAL ELEMENTS NATIONWIDE

In what has now become a recurring decimal for the Boko Haram criminal elements across Operation LAFIYA DOLE Theatre, owing to the growing effectiveness of the Nigerian Army Super Camp Concept, some criminal Boko Haram elements mounted on 5 Gun Trucks and motorcycles attempted to infiltrate 112 Task Force Battalion troops’ location at Mafa in Mafa LGA of Borno State on 1 December 2019. In a shameless display of poor training and tactics, the marauding criminals made themselves easy target, as they fell prey to the superior fire power of the resilient and highly professional troops of the said Battalion.

At the end of the encounter which lasted for about 40 minutes, the criminals once again suffered heavy casualties in both men and equipment as they were seen retreating in disarray with some of their dead and wounded. However, the dogged troops of the Unit embarked on a hot pursuit of the scampering insurgents and exploited their withdrawal route.

In a similar development, 2 female suicide bombers attempted to infiltrate the Defence Company of 26 Task Force Brigade Garrison location at Gwoza in Gwoza LGA of Borno State on 1 December 2019. Consequently, the eagle eyed soldiers deployed on sentry duty identified the criminal intruders and neutralized them before they could detonate their suicide vests.

In yet another development, based on credible intelligence, troops of 21 Special Armoured Brigade in conjunction with elements of the Civilian Joint Task Force conducted a robust Clearance Operation to suspected Boko Haram enclaves at Zua and Kotembe Villages in Bama LGA of Borno State in the early hours of 2 December 2019. Incidentally, the cowardly remnant Boko Haram criminals hibernating in the general area opened fire on the advancing troops from an ineffective range and fled in disarray towards Kerawa along the Nigeria- Cameroon boarder. Nevertheless, the gallant troops continued with their advance and bravely searched the area. It is gratifying to note that, 12 women and 4 children held captives by the insurgents were rescued and evacuated to safety.

Elsewhere, other ongoing Nigerian Army Operations and Exercises conducted across the country continue to yield positive results as our gallant troops continue to decimate  the criminal gangs and deny them freedom of action.

Relatedly, troops of 9 Brigade Garrison on Exercise CROCODILE SMILE IV, while acting on credible intelligence from some law-abiding citizens, conducted a successful Cordon and Search Operation in a resident of one notorious drug peddler in Ipaja area of Lagos State. During the Operation, troops busted and discovered a large underground makeshift bunker used for the storage of large quantities of different kinds of illicit drugs.

In a related development, troops of 146 Battalion on Exercise CROCODILE SMILE IV also neutralized one bandit while others are believed to have escaped with various degrees of gunshot wounds during an encounter at Lafarge Company general area in Akamkpa LGA of Cross Rivers State. Also, troops of 16 Brigade Garrison on Exercise CROCODILE SMILE IV arrested one armed robbery suspect and recovered one locally fabricated pistol at Tombia Roundabout in Yenagoa, Bayelsa State.

Similarly, on 1 December 2019, acting on credible information, troops of 343 Artillery Regiment, Quick Response Force on Operation CROCODILE SMILE IV raided a cultists’ staging area along Ahoada Road, Elele in Ikwerre LGA of Rivers State. After a brief gun battle, the criminals retreated into the nearby forest. However, the troops neutralized 2 of the cultists and recovered one AK 47 Rifle, one locally made pistol and 30 Rounds of 7.62mm Special ammunition.

In a similar vein, troops of 8 Division Garrison while conducting Clearance Operations, discovered a bandits’ logistics camp at Tagimba area in Gudu LGA of Sokoto State. However, the criminals fled the location before arrival of the unrelenting troops. Nevertheless, the troops destroyed their Logistics  and exploited further ahead.

The Chief of Army Staff, Lieutenant General Tukur Yusufu Buratai commends troops for their exceptional display of patriotism, professionalism and responsiveness. He however admonishes them to remain resilient and continue to be steadfast in the fight against criminal elements across the nation.