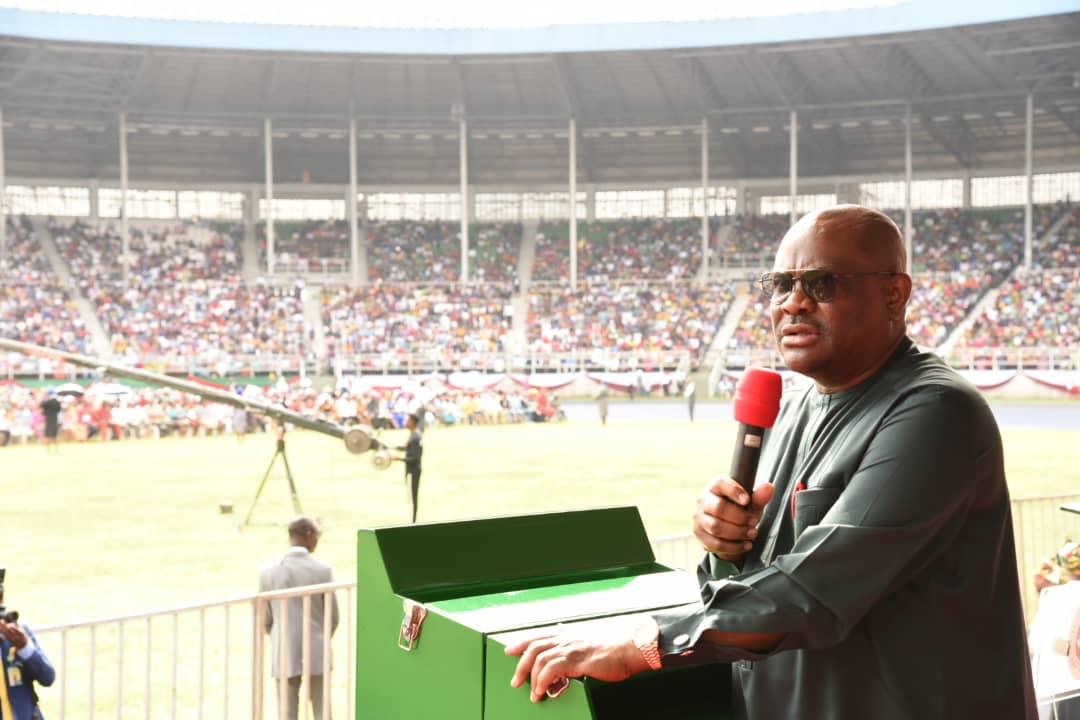 Speaking during the Redeemed Christian Church of God (RCCG) Holy Ghost Rally at the Adokiye Amiesimaka on Sunday, Governor Wike described himself as a living testimony of God’s blessing.

He said: “Nigerians are aware of what happened on 9th March, 2019. If anyone says he does not believe in God, that event of March 9 should make you believe God.“

“But for God, the enemies would have taken over the state. I thank the Church for standing firm. They prayed for God’s will to be done and God’s will was done. But for your prayers, I won’t be here as Rivers State Governor. “

Governor Wike said the criticisms on his declaration of Rivers State as a Christian State cannot stop him from affirming the reality.

He said: “Anytime I have the opportunity, I repeat the declaration with authority and I owe nobody an apology. I am standing on solid Authority. Rivers State is a Christian State.”

He commended the Redeemed Christian Church of God for their sanitation programme, tagged “Pick A Thrash “.

“If we have all churches embark on sanitation, our state will be cleaner.  We will support this programme financially and we shall donate three vehicles to the Church for the programme”; he said.

Governor Wike said that God has used the General Overseer of RCCG to bless Rivers State. He said that the Annual Holy Ghost Rally has been a blessing to the State.

General Overseer of Redeemed Christian Church of God (RCCG), Pastor Enoch Adeboye said everyone needs help. He noted that the best source to get help is from God.

He said that Divine Help is always on time and manifests at the time it is needed.

The Pastor in charge of Redeemed Christian Church of God (RCCG), Pastor Belemina Obunge announced that the Second Phase of the Church’s Environmental Sanitation Programme has commenced.

He expressed gratitude to Governor Wike and the Government of Rivers State for the support over the years.

Over 40,000 Christian Faithful thronged the Adokiye Amiesimaka Stadium for the RCCG Holy Ghost Rally, which had the theme: “Divine Help”