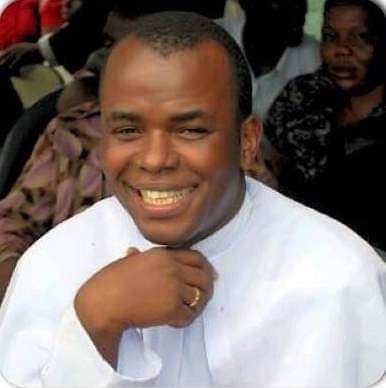 The Spiritual Director of Adoration Ministry in Enugu, southeast Nigeria, Rev. Father Ejike Mbaka, has released a new prophecy on those against him for predicting the sack of Emeka Ihedioha as Imo Governor.

Father Mbaka came under attacks since the emergence of Hope Uzodinma as the governor of Imo State, released the dangerous prophecy on social media network, Facebook.

In the prophecy, Father Mbka declared judgment on those who accused him of dishing out fake prophecies.

The Adoration Ministry Spiritual Director in a post on the Ministry’s Facebook page maintained that his prophecies were from God and not an evil altar.

Declaring the blessings of God on his followers, the cleric said those who called him a politician will not escape God’s judgment.

“I bless the name of the Most High God because He said it and it came to pass.

“My prophecy is not borrowed or from any evil altar but from God Almighty, the creator of heaven and earth,” he said.

Speaking further, Mbaka added: “Some accused me of being a politician but only God knows who I am. Let God of Adoration speak for me. You who speak evil against me, hmmm… God of Adoration is a consuming fire. I declare judgment upon those who curse me for nothing. My hands are clean.

” I bless those who know the truth and stand for it. Let God of Elijah fight for me. Let the heaven speak and let the children of God receive their all-round blessings, in Jesus’s mighty name!

“The Lord is taking you to a level even your enemy cannot reach. This will be your year of abundance. Everything you ask in your prayer will be in abundance, in Jesus mighty name,” Father Mbaka declared

All Hands Must Be On Deck To Defeat The Madness Of Terrorists!