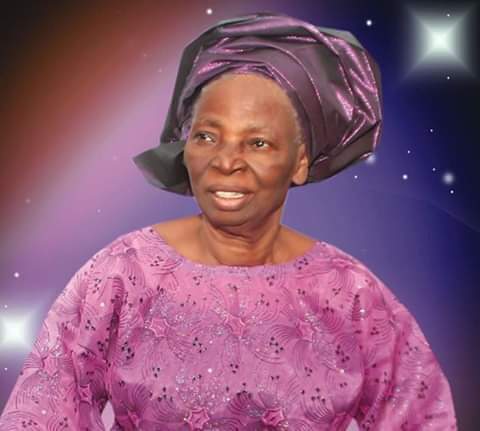 Mrs. Deborah Adebola Fasoyin is the leader of the renowned Good Women Choir which has been in existence for over 40 years and noted for sonorous hits such as Halleluyah and Odun Nlo Sopin. In this interview, the septuagenarian speaks about the music group, family and other things

Let me start by saying it is Christ that leads the choir, not me. It is just a privilege that I am the leader. Good Women Choir started way back with the Christ Apostolic Church, Ibadan and prior to 1975, they were known as the Good Women Association which was a gathering of women in the church. If your spouse is a member of CAC, automatically, you are a member of the association as a woman. Every year, we hold conventions in Lagos, Kano, Kaduna and other places. I was an Anglican before I married my husband who is a member of the CAC. The problem we had then was that when we arrived in any town, it was always difficult to get a choir to sing and make us feel relaxed. Consequently, in 1975, when we came back from Kano, the Good Women Association decided that we should have our own choir. An announcement was made in all branches of the church that every branch should send two educated members who are interested in music to make up the Central choir. We gathered and we were about 100 plus at the time and started practising. I was already a member of the choir in the Anglican Church before I joined the CAC Eleta where I continued. I was one of the people sent to the Central Choir. Before each convention, we tell our members to read the Bible, pray and bring songs. We’ll look through and as led by the spirit, choose from the compositions. At a stage, we were told that we could wax a record.

When we sang at conventions, people hailed us and were healed, and they gave testimonies the following year. When it was suggested that we should begin to record some of our compositions, we couldn’t say no and somebody introduced us to Ibukun Orisun Iye Records and our first recording, Halleluyah was released in 1977. By the grace of God, we have 25 albums to our credit.

It was divine intervention because up till date, it frightens me. When we had the first anniversary of the Good Women Choir, I arrived at the church, saw the pamphlet which read, “Leader-D.A. Fasoyin.’’ I nearly fainted because no one called to tell me that I would be the leader.  I felt that every member of the group at the time was qualified and could lead. I was singing soprano and we had alto and tenor singers as well. I was really surprised, so it was really God’s intervention.

That’s the miracle because my parents were illiterates. One day, in church, we wanted to have our harvest and the choir was to sing. I was only 10 years old and I had been exposed to music. Someone was asked to dance in a particular way. I think it was called Rhumba dance and this girl simply refused to learn. As an onlooker, I told them that, ‘‘Look, I can do this.’’ I did it so well and became a member of the choir at age 10. This was fueled by the fact that I had personal interest in singing and the interesting thing is that all my brothers (I’m the youngest of six children and only girl) were organists and singers and they encouraged me to explore my musical side.

The only challenge that I can remember vividly was after recording our third release; Mon Woju Re Olorun Mi, one of us; a tenor singer was asked to come out of the group to lead.

That’s an interesting question. God sent three men of God to us from different towns that we should not charge fees for our performances and that the reason He backed us as God is because the gospel is free and we must therefore make everything free. We told the leaders of the Good Women Association that this was the message, so if a performance came up, we referred clients to them. We never knew that they were charging fees. One day, the cat was let out of the bag when we got to a function. There were no seats for us to sit down and somebody just blurted out, ‘’Let them go and sit anywhere, after all, we paid them.’’ We were shocked that our leaders were receiving money against God’s instructions. From that point, we stopped the association from making bookings on our behalf. We just informed people that the Good Women Choir is now autonomous. When they heard that, they drew one of our members and started another parallel Good Women Choir and recorded three albums.

We went to God in prayer on the mountain and told Him that if what happened was His will, He should help them to continue because the ultimate is to change lives but if their mission is to bring us down, He should intervene. Of course, people were deceived. Many bought the factional albums because they thought that it was released by us so there was some kind of confusion but later, after the third album, they knew the difference and stopped buying their albums.

Our system of composition is different from others because it is a group. Whenever we want to go into the studio, we assemble and tell our members that we want to go for another release and everybody should bring what they have composed. We will bring them together and by the spirit of God, we would look at which ones can make the next release. After doing that, we keep other compositions for the next album.

In 1976, there was the creation of more states in the country so many of our members had to go with their husbands to their respective states, then our number reduced. Nobody died when we were together but as we grew older, God called some people home. Another factor that reduced our strength was the factional break away that I talked about earlier. Those who left never returned to us. In 1995, when we released our 25th album, I was a bit ill and the doctor advised me to slow down on activities, so we didn’t go to the studio for 10 years. However, in 2005, my children said to me, ‘’Mummy, the doctor said that you should slow down but we will book a studio for you, go and try your singing skills again.’’ They did and when I went in, they were amazed at what they heard. As a result of that, I had to release my own first single; Ogo Ikehin and Ibere Otun. When my old colleagues heard it, they inundated me with phone calls saying that they can still sing and want to come back on board. Ten of us gathered in my house and God said that we shouldn’t release new materials. Rather, we should churn out a video CD of what we had done before and that was what led us to release the video version of Odun Nlo Sopin and Odun Yi Atura as everyone was used to the audio versions already.

I am a native of Oyo town and the youngest child and only girl of six children so I have five brothers. For my elementary education, I attended Saint Andrews Demonstration School, Oyo, although I didn’t finish from there because my father; being an illiterate felt there was no need to educate the girl-child since she will end up in the kitchen. My brothers therefore took me to Jos so that I could continue my education. I spent one year there, another in Ogbomosho and Lagos. They were just passing me on so that I would not stay in Oyo and my parents would not spoil me. I ended up finishing my primary school in Lalupon, near Ibadan. I went to primary school in five different towns. I thereafter went to Anglican Girls’ Modern School, Oritamefa, Ibadan and after my first year there, nobody could send me to school again so I had to go and teach for a year in a village in Oyo Town before I came to Lagos and joined Kingsway Stores where I spent 29 years as a sales clerk before I retired. However, when I got married, I had to go and meet my husband in Ibadan, so you can say that fate brought me back to the town. Luckily too, I had all my children before Good Women Choir started.

I am just 77 years old and I am so glad that after all these years, we are still relevant as a group because you can imagine a group that took a break for 10 years, came back and people still accepted them; it’s amazing and it’s a miracle. I am so happy within me that I am still useful for God because I am now a member of Daystar Christian Centre where I am the President of the Golden Mothers, which is for those who are 50 years and above.

We were scared of collecting it initially because of what God had told us and said we didn’t want to collect still. We told our manager to help us buy instruments so that anywhere we go, we won’t have to borrow. When Odun Nlo Sopin started bringing in money, we told him that we needed a bus.  These days, those who go into gospel music expect quick money. I often tell people who come to me for advice that, ‘If you know that you want to propagate the gospel, don’t think about money.’’ Seek the anointing first, then money will follow. If you think about the money first, your album may do well in the market but it won’t last and that’s the truth but if you have the mind-set of spreading the gospel in your heart, things will work. Youths of today want quick money and rush to the studio to record an album. When it comes out, it doesn’t even have substance. You cannot blame most of them, there are no jobs after they leave school.

Odun Nlo sopin is actually a CAC composition which dates back to the early 1940s. It was a hymn that was sung at the end of each year by all CAC churches but we added only two verses to the original composition so one can’t really say who wrote it but many have said that we made it famous and we thank God for that. We also recorded the song, Gbakoso(Take Charge) during the regime of General Ibrahim Babangida which reflected what was going on in the country at that time.

I feel fulfilled when I hear people listening to Odun Nlo Sopin over the years. I also want to finish strong and empty before I go and meet my creator.