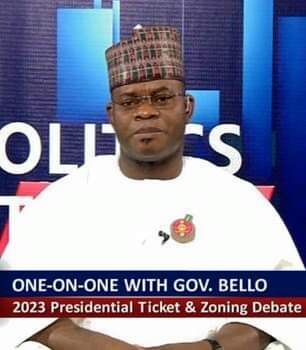 I Will Fix Nigeria In 365 Days As President - Gov. Yahaya Bello

He made the disclosure while speaking on the theme “Media in Times of Crises: Resolving Conflict and Achieving Consensus” at the two-day of the 17th Nigeria Guild of Editor’s Conference in Abuja on Friday.

The Governor said, “It won’t take more than 365 days to fix issues of insecurity, corruption, mismanagement among others in the country.

“From what I have come to realize and know, it takes a decisive, courageous, safe-minded and balanced leader to be able to fix this country once and for all. And to get this done, require the collaboration, understanding and restaking agenda setting of the media to educate, sensitize and teach our people on the choice of the next leader.”

According to him, the right leader shall emerge where the Igbos, Yorubas, Hausas among others will feel the real impact of leadership.

“I believe that we have those leaders in abundance in this country. I believe it only take the eagle eye and sharp pen to bring those leaders.”

He commended the organizers for choosing the topic, allowing them to share their experiences and proffer solutions on the way forward noting that insecurity issues in Nigeria is local and it is perculiar.

He stressed that Kogi State neighbouring 10 states out of the 36 states is managing the security of the state and also assisting her neighbours to manage theirs.

The Governor emphasized that if others will sincerely apply same security mechanism like his state will achieve the kind of security-safety and cohesion required in the country.

He reiterated that some security model his government implemented by simple identification of problem areas beginning from the leadership style, making sure there’s existence of fairness, equity and Justice in the system.

“Ensuring everyone from top to bottom in all communities live up to expectations with enough sensitization on what is obtainable and inclusiveness every ethnicity, groups to achieve unity and peace.”

He attributed the penetration of Boko Haram, ISIS and other evildoers to the mountainous and forest terrain of the state adding, however, his Government in collaboration with the Security agencies were able to neutralized their operation and sanity was sustained across the state.

“We are not saying that there is no insecurity trait but on the scale of 1 to 10, I think we have brought insecurity to 2 percent only, because we were sincere with all our actions, all our promises and everything we do concerns the citizens,” he said.

He stated that largely issues of insecurity are caused by youths of the country whom he believed were deprived of the system inherited, “class difference become the order of the day, certain sections were deprived, system were we have government of father and son, friends and acronyms and where youths are turned to political hallelujah as well as men hallelujah.”

Gov. Bello however admonished the media to rise to the challenge to change the narrative and set agenda especially in the area of leadership by communicating the right message to the people and move Nigeria forward rather than allowing politicians to set the agenda.

Responding to restructuring of Nigeria, he said restructuring is a system of government where we have leaders that will strike balance and with fairness but the term seems to means different things to different people, where to some is about dividing into regions, some is decentralizing power and others is born out of selfishness.

He lauded the APC government for fair governance and also noted that there are areas that needs improvement.

Among the top personalities who graced the occasion were representatives from Kaduna and Osun State who also shared their state experiences and with solution to the issue at hand and also Representative of Yobe State.

You Will Only Succeed If You Are United!