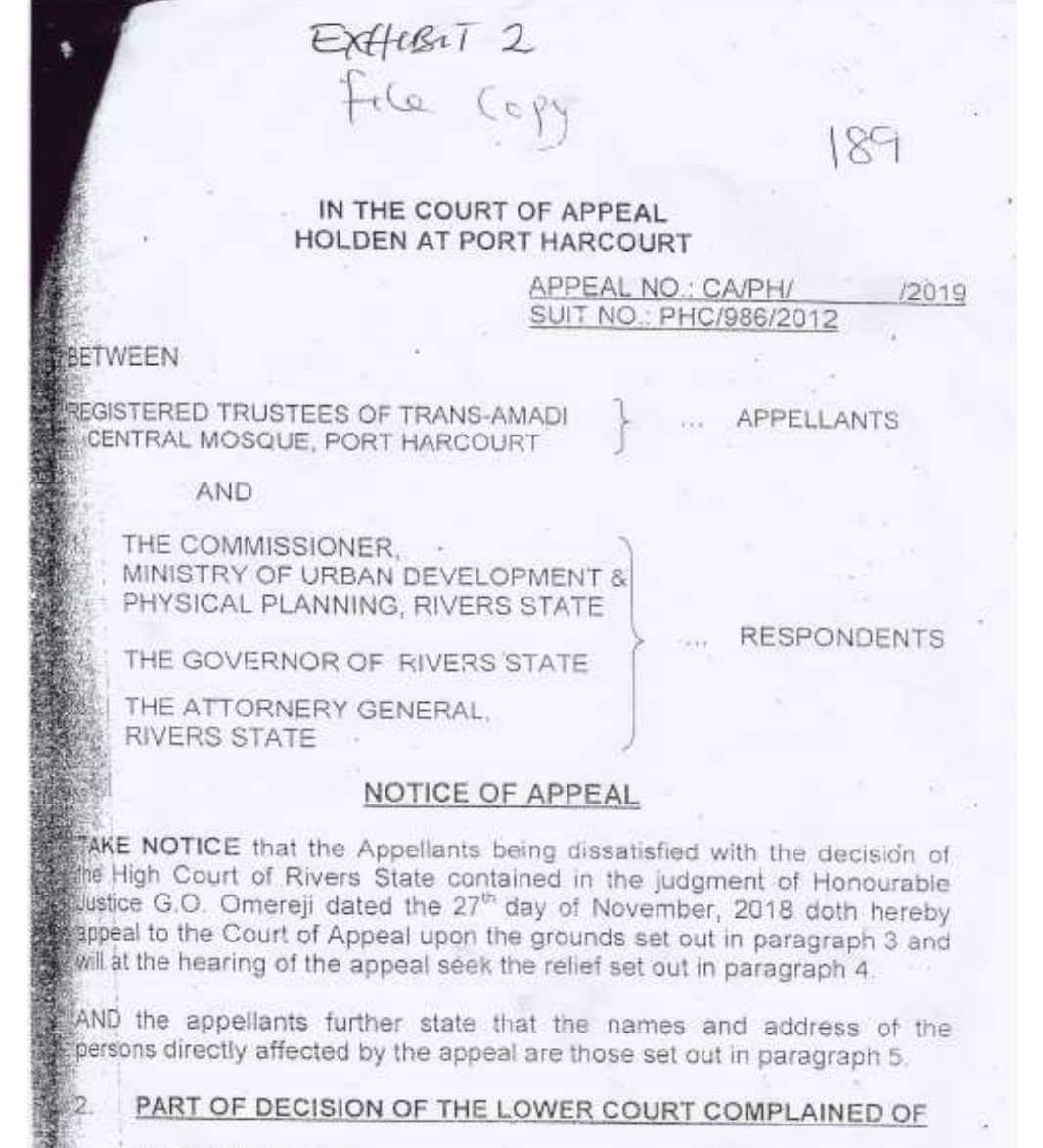 The Registered Trustees of Trans-Amadi Mosque have filed an appeal at the Court of Appeal,  challenging the judgment of Justice G.O. Omereji which conferred the ownership of the disputed land at Rainbow town on the Rivers State Government on the basis of title documents  that date back to old Eastern Region.

In Suit Number CA/PH/189/2019, the Registered of Trans-Amadi Mosque said that Justice G.O. Omereji erred while delivering judgment on Suit Number PHC/986/2012, when he declared that the Rivers State Government’s title was superior to the ownership claim of Chief Amadi who sold the land to them.

The Registered Trustees of Trans-Amadi Mosque formulated 10 Grounds of Appeal, urging the Appeal Court to set aside the judgment of the High Court of Rivers State dated the 27th day of November, 2018 in Suit No. PHC/986/2012 Registered Trustees of Trans-Amadi Central Mosque, Port Harcourt v. The Commissioner, Ministry of Urban Development & Physical Planning, Rivers State & 2 Others.

They claimed that the learned trial judge erred in law by holding that the effect of Exhibit K, the certificate of title, in the instant case, is that the Rivers State Government, has valid title to the land in dispute.

In a notice of appeal, they said: “TAKE NOTICE that the Appellants being dissatisfied with the decision of the High Court of Rivers State contained in the judgment of Honourable Justice G. O. Omereji dated the 27th day of November, 2018 doth hereby appeal to the Court of Appeal upon the grounds set out in paragraph 3 and will at the hearing of the appeal seek the relief set out in paragraph 4

“AND the appellants further state that the name and address of the persons directly affected by the appeal are those set out in paragraph 5”.

The Appellants also claimed that the learned trail judge erred in law in failing to consider and determine the issue raised by the appellants that the respondents are stopped from claiming title to the land in dispute in this suit.

It will be recalled that Rivers State High Court declared that the disputed land at Rainbow Town in Port Harcourt which is currently under the control of the Rivers State Ministry of Urban Development Board belongs to the Rivers State Government.

The Registered Trustees of Trans-Amadi Mosque, Port Harcourt had approached the Rivers State High Court in Port Harcourt in February 2012, after the  then Governor Chibuike Rotimi Amaechi Administration through the Rivers State Ministry of Urban Development and Physical Planning stopped them from erecting  a structure on the disputed Government land without approval.

In that instance, the Registered Trustees of Trans-Amadi Mosque, Port Harcourt claimed that the Amaechi administration through its agents and servants forcibly entered the land in dispute, fenced it up with wired fence and locked it up. The several claims of the claimants were marked Exhibits A to H1 respectively.

“It is very clear that from the above authorities, the effect of Exhibit K, the Certificate of Title in the instant case, the defendants, especially the 2nd and 3rd defendants have valid title to the land in dispute because the acquisition of the land as in Exhibit K by the Government extinguishes every prior existing title over the said land”.

The Court declared that Exhibits J1 and J2 clearly show that the claimant purchased a land from Dr E.E. Amadi, which was already owned by the State Government following its acquisition by the Eastern Nigerian Government in 1959.