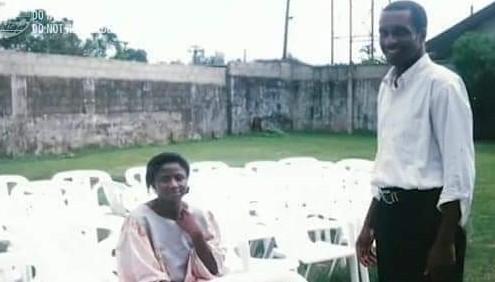 THE MAN DAVID IBIYEOMIE ON HIS 59TH BIRTHDAY

There is an old saying that goes, “A child must be born but a man, a man must be made” Nothing revives because of men in the figurative sense but when it does, it is because he has connected and stayed connected with the maker obeying, discovering, walking and following every instruction without hesitation. It is because he has presented himself as a vessel worthy of being used by the maker. This is the story of one of such men.

On a fine Sunday morning in October 1962, the 21st day to be exact, somewhere on the beautiful Island called Bonny, A home witnessed the birth of a son David. The young boy grew in strength and in spirit. Everyone around him could tell that there was something extraordinary about him. Not long after, his family moved away to the bubbling city of Port Harcourt where he attended Banham Primary school in 1969 and Government Comprehensive Secondary School in 1979. He was no average student. He was awarded two full scholarships by reputable institutions. In 1980, he went on to study Microbiology in one of the State’s most prestigious schools known at the time as the University of Science and Technology. He was ranked up in class and awarded Director of Socials. He was also made Mr. FM in 1984.

As the year went by, David moved to Lagos in the midst of living life in the fast lane. He realised that something was missing. And one day, being July 1995, according to God’s divine plan, without being preached to, he gave his life to Christ. Since then, he has never looked back. He read through the book titled “Living in the Supernatural” authored by Bishop David Oyedepo. This stirred up his love for Christ and by October that same year, he joined the World of Faith Bible Institute, Living Faith Church, Iyana-Ipaja. The first message he heard by Bishop David Oyedepo was raw and indeed without hesitation, he took the spirit which has changed his life forever.

When David Ibiyeomie gave his life to Christ, God told him clearly, “I will use you” He was given the mandate to establish the Kingdom of God here on earth with signs. On the 13th of April, 1997, Salvation Ministries was born. Today, twenty-six (26) years after his new birth and twenty-four (24) years strong in ministry, Pastor David Ibiyeomie has enjoyed and is still enjoying the grace of succeeding without experimentation; the grace of supernatural speed; the grace of excellence.

Here are some striking testimonies from Pastor David Ibiyeomie’s years in ministry:

“Pastor, Jesus is the great physician. This man was HIV positive. He said since 2008 he was diagnosed, he refused to take medication. He came to service yesterday believing God. Today, he went for a test and the test result is here and he tested negative.”

“This young man is twenty-five (25) years old but he said when he was three (3) years old, he started discharging pores from his left ear. For the past twenty -two (22) years, he has been discharging pores every day. He has cotton wool permanently in his ear. He said yesterday, he attended the Service and he felt something leave his ear. He went home and since yesterday till now, the ear has been dry.”

“This child is four (4) years old. He was born dumb. Pastor, he could not mention the letter “A” not even the numeral “1” let alone mention his name. Right here, in this service, he was struck by the Holy Ghost, he could talk for the very first time.”

“When I had my daughter, it was like the world has fallen on me. What everybody thought was impossible became possible. Everybody thought she would have been lame, a cripple, blind or brain dead. But just one word, ‘Go, it is done’ and the transition started. Working three months, everything changed through the instrumentality of a man that God has sent to give succour to mankind, Pastor David Ibiyeomie.”

Pastor David Ibiyeomie in two decades has redefined philanthropy and replicated the core values of authentic leadership. In 2017, he founded the David Ibiyeomie Foundation, an independent, privately funded non-profit humanitarian organisation. In 2018 and 2019 alone, the foundation was recorded to have spent over one point five billion naira (#1,500,000,000) on scholarships training students worldwide. So far, the David Ibiyeomie Foundation has given over eight thousand (8000) scholarships, trained over two thousand (2000) people in skill acquisition and delivered grants to over one thousand (1000) businesses.

David Ibiyeomie’s love for education makes him stand out in our world today. His dislike for mediocrity makes him push for excellence through education. In response, he has provided free and accessible educational facilities to people nationally and internationally. In Chokhmah International Academy, over forty-five per cent (45%) of the school’s population are placed on a scholarship. In 2020, he built and donated a modern-day university hostel to Ignatius Ajuru University. In 2019, he donated over one thousand (1000) writing materials to UBBE Model Private School, Mile One in Port Harcourt, Nigeria. He also established a completely free world-class private school equipped with state-of-the-art facilities for learners in Port Harcourt. This school is located at No 100, Aggrey Road Port Harcourt, Rivers State. His support for education is one of his commitments in striking a balance between academic excellence and sound character. His love for education has exceedingly imparted the world. He was recognised by Ignatius Ajuru University for providing inclusive and equitable education for all.

In October 2018, David Ibiyeomie built and donated a home for the elderly. This was done in partnership with the Catholic Church. David Ibiyeomie through his books in Salvation, the Holy Spirit, Leadership, Prosperity and many more has inspired many giants today. He has written over a hundred (100) books with best-sellers translated into French, Arabic and German. Some of his books are:
Keys To The Top
The Power Of His Resurrection
Touch Of Excellence
Holy Spirit My Helper

Indeed, David Ibiyeomie’s impact goes beyond the pulpit. He is breaking boundaries and reaching people of all faith, races and backgrounds. Many lives have been changed through this one man.