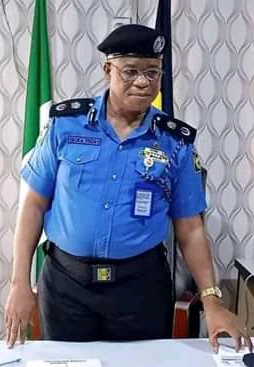 *“Promises to deliver improved Policing Services to the State”.

Eboka Friday who  was the immediate past Commissioner of Police, Railway Police Command, arrived the Rivers Command headquarters today where there was brief handover ceremony and close door meeting with  top Police Officers.

CP Eboka Friday, takes over as the new Commissioner of Police, Rivers State.

Senior Officers of Police in Rivers Police Command in a meeting with the new CP.

In a press Statement by the Command’s Public Relations Officer, SP Nnamdi Omoni,it was at the Railway Command “where he was found professionally competent and redeployed to the State as the 42nd Commissioner of Police.”

Omoni also disagreed with Governor Nyesom Wike’s assertions yesterday that  Commissioners of Police posted to State are done not based on competence,but compromise.

“CP Eboka is a Police Officer with impeccable track records in crime fighting. He promises to bring his wealth of experience to bear in Policing Rivers Command and welcomes all people of goodwill to join him in the task ahead.”

“CP Eboka Friday  took over the duties and responsibilities of the Rivers State Police Command from AIG Joseph G. Mukan psc (+) who was recently promoted to the rank of Assistant Inspector General of Police and redeployed to Zone 8 Headquarters Lokoja as the Zonal Commander.

He was appointed into the Nigeria Police Force as a Cadet Assistant Superintendent of Police (ASP) in 1988 and on completion of  his training was posted to Delta State, where he did his one year compulsory attachment and later served in various  Police Departments across the country as follows:-
Divisional Police Officer in about six (6) Divisions in  Lagos State, including Lekki.Assistant Commissioner of Police, Explosive Ordinance Disposal  (EOD) Force Headquarters, Abuja.

CP Eboka Friday is happily married with children. His hobbies include, reading, football and Golf etc.

He is a versatile Police Officer with impeccable track records in crime fighting. He promises to bring his wealth of experience to bear in Policing Rivers Command and welcomes all people of goodwill to join him in the task ahead.

However,Governor Nyesom Wike of Rivers State had taken a swipe at Inspector General of Police,IGP of deploying Commissioners of Police to the State not based on competence in crime fighting but out of compromise.

Wike had alleged that competence and genuine efforts at fighting criminality and insecurity in the country are often undermined by political inference in the posting of Commissioners of Police.Governor Wike said it is very disappointing that the Inspector General of Police (IG) will compromise competence in posting a Commissioner of Police(CP) to Rivers State because a favour seeking politician had approached him for such patronage.

The governor made the accusation when he led the Chief Whip of the Nigeria Senate, Senator Orji Uzor Kalu, former Minister of Works,Mike Onolememen and other dignitaries on project inspection tour in Port Harcourt and ObioAkpor Local Government Areas of Rivers State on Thursday.

Governor Wike said such handling of touchy issues like insecurity makes it difficult for him to partner with the Federal Government often, especially because they are not committed to solving the insecurity plaguing the country.

Otherwise, he stated, why should the Inspector General of Police grant such demand of posting a CP to compromise competence.

“There is so much insecurity in Nigeria. There are killings every where and they (APC) told Nigerians that they will solve the problem. But the problem is not being solved.

“They appoint Commissioner of Police (CP) based on patronage. A politician from my state will go to see the Inspector General of Police and ask him to give him a CP.
“And the IG will not post CP based on competence to fight crime but based on the fact that the man in the party says he wants so and so person.
“When the person comes,  will he fight insecurity?  No. That’s the problem we have in this country today. How can I partner with such a government.  A government that will not do things based on competence.”

Observers of Rivers Politics  point out that Governor Wike’s fears may not be unconnected to the fact the CP Eboka Friday’s last posting as the Commissioner of Police, Railway Command may have made him to have very close working relationship with Chibuike Rotimi Amaechi, the Transportation Minister whose Ministry is in charge of Railway,both of who are having frosty political relationship.