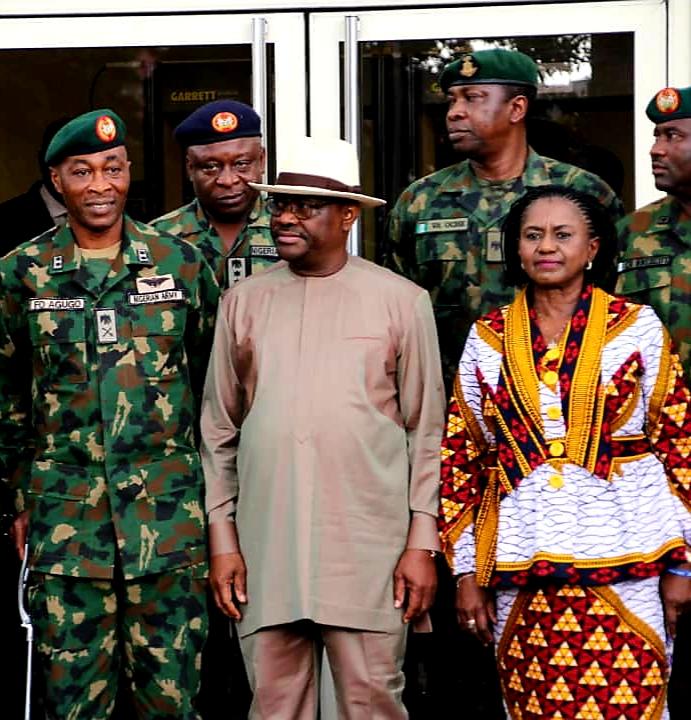 Rivers State Governor, Nyesom Ezenwo Wike has advised top military personnel not to allow themselves to be used by politicians, because the security architecture suffers when politicians influence military operations.

Speaking during a Courtesy Visit by General Felix Agugo, the New General Officer Commanding 6 Division of the Nigerian Army at the Government House Port Harcourt on Friday, Governor Wike said that some politicians make promises to military officers, only for them to abandon them later.

He said: “Don’t allow politicians to use you. Otherwise, they will use and dump you. They will tell you that they will make you this or that, but at the appropriate time, all their phones would be switched off.  Do the right thing and the society will move forward.”

Governor Wike said that if the military restricts themselves to their security duties, the country will be better for it.

He said security agencies have a responsibility to protect lives and property, noting that the Rivers State Government will continue to support the military to improve the security architecture.

Governor Wike said that he will never approach the military or any heads of the security agencies in the state to do what is wrong.

“Why nobody has been able to defeat us is that our hands are clean. I will never call you to release an arrested criminal, cultist or kidnapper. If anyone who is working with me seeks such favour, inform me.

“We must work together to move the state forward”, he said.

The Governor thanked the Nigerian Army for restoring security in the Ogoni speaking area of the state.

“We have to initiate awards for performing officers to encourage them to continue to work”, he said.

He noted that the initial situation where a General Officer Commanding 6 Division resumed work, without visiting the Rivers State Government House where the headquarters is situated, but visited other adjoining states proved that something sinister was planned.

He said: “I must place on record that I have inherited a Division that is grateful to the Government of Rivers State for your support for our operations and sustenance.

“I bring you the appreciation of the Chief of Army Staff for the good things that the Army has received from the Rivers State Government.”

He also commended the Rivers State Governor for setting up the Operation Sting Security Outfit.  He said that the Outfit complements the efforts of the Nigerian Army in security improvement.

“We promise you that the investment you are making to enhance security will not be in vain. We will ensure that you achieve the security that you desire”, he said.

The General Officer Commanding 6 Division of the Nigerian Army commended the Rivers State Government for the support in the establishment of camps for Exercise of Crocodile Smile.

He said that he was at the Government House Port Harcourt to pay his respects to the Rivers State Governor as the host of the Headquarters of the 6 Division.

ISWAP LOSE SCORES OF THEIR CRIMINAL INSURGENTS INCLUDING TOP COMMANDERS