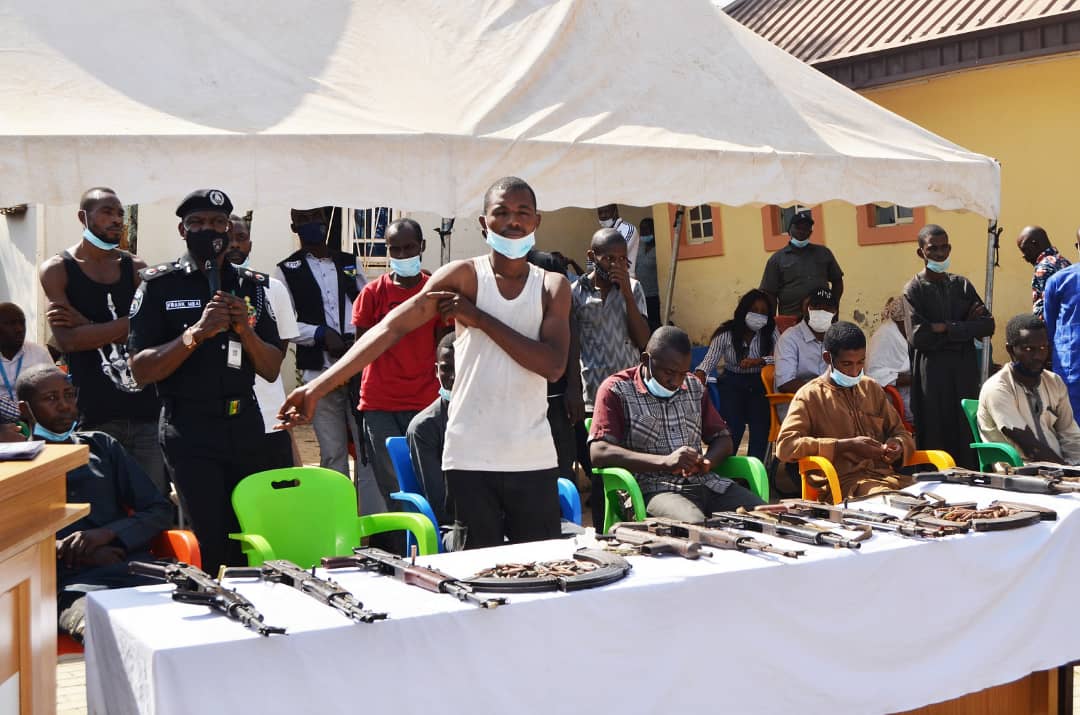 IGP ASSURES THE NATION OF IMPROVED SECURITY IN 2021

The Inspector-General of Police, IGP M.A Adamu, NPM, mni has assured Nigerians of improved security in the year 2021. The IGP stressed that the Force will be unrelenting in the fight against all forms of crimes especially kidnapping, armed robbery, banditry, cultism, cybercrime, Sexual/Gender-Based Violence (SGBV), amongst others in the country in the year 2021. The IGP assured that the NPF will implement aggressive, proactive, intelligence-driven and community-based crime fighting strategies in its quests to make the country safer. He promised the Force will take the battle to the door steps of the criminals and also expand its collaboration with the citizens and other Law Enforcement Agencies in its bid to flush out criminal elements in the country.

The IGP, while reviewing the scorecard of police operations at the Force CID and Force Intelligence Bureau, revealed that a total of 21,296 criminal suspects involved in various violent crimes, were arrested and 3,347 firearms, 133,496 ammunition and 960 stolen vehicles recovered. Also, 1,002 kidnap victims were safely rescued from their abductors and reunited with their families.

Meanwhile, in a renewed commitment by the Force to advance the gains recorded in the fight against crimes in the country, particularly in the out gone year 2020, operatives of the Nigeria Police Force arrested eighteen (18) criminal suspects for offences of armed robbery, kidnapping, cattle rustling and other violent crimes. Eight (8) AK47 rifles, One (1) SMG sterling gun, 236 AK47 Ammunition, 12 pieces of SMG sterling gun ammunition, Two (2) Toyota Camry Saloon Cars, 2006 and 2014 models (already released to the owners), were recovered from them.

Notable among the arrests, is the arrest of one Abubakar Umaru a.k.a Buba Bargu, ‘m’, 35 years, native of Kato Shiroro area of Niger State by the operatives of the Special Tactical Squad (STS). Investigations by Police Team revealed that, Abubakar is a member and armourer of a gang that has carried out several kidnap for ransom operations along Lokoja-Abuja/Abuja –Kaduna highways and other major highways in the North-Central States of the country. Interestingly, this group carried out the abduction of one Mohammed Ahmadu a.k.a CONFIRM ‘m’, 30 years, a kidnap kingpin and leader of another notorious kidnapping group in the North-Central when he came to their hideout in the forest to sell live ammunition to the group. He was held and shot in the hand until his gang members paid a ransom of One Million, Five Hundred and Fifty-five Thousand Naira (N1,555,000.00) only for his release. Five (5) AK47 rifles, five (5) magazines and 120 rounds of AK47 ammunition were recovered from Abubakar Umaru at his hideout in the Forest.

Similarly, Police operatives arrested five (5) members of an armed robbery syndicate who have their criminal network and base spread across Edo, Delta, Ondo and Lagos States. The suspects namely; Godspower Ebogie ‘m’, Samede Miracle ‘m’, Efosa Rowland a.k.a Double ‘m’, Michael Ifeanyi Egwuatu ‘m’ and Ifeanyi Ewurum a.k.a Rati ‘m’ were arrested at various locations and linked to several cases of armed robbery and car snatching at gunpoint under investigations by the Police. Two (2) Toyota Camry Saloon Cars, 2006 and 2014 models, robbed from one Mr. Osayuwamen Isokpan and Mr Harrison Eribo on 26/6/2020 and 5/7/2020 respectively in Benin, Edo State were recovered from the gang.

Meanwhile, the IGP has commended the Police Teams for their dedication to duties which resulted in the successes recorded. While appreciating the citizens for their support so far, the IGP calls for improved partnership and collaboration between the citizens and the Police particularly in the area of providing useful information the Police require in tackling crimes and apprehending unrepentant criminals in the country.