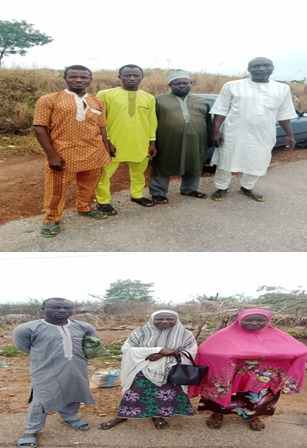 …AS ARMY INTENSIFY OPERATIONS ACROSS THE NATION

Troops of the Nigerian Army (NA) continue to discharge their constitutional mandate with high sense of professionalism and responsiveness across the theatre of operations. In their unrelenting effort to clear major routes of Boko Haram criminals’ Improvised Explosive Devices (IEDs) for safe commuting by citizens in the North East, troops of 27 Task Force Brigade Garrison in conjunction with Explosive Ordnance Devices (EOD) Team discovered and safely detonated 3 large IEDs along Buni Gari-Kamuya Road, linking Borno and Yobe States. The IEDs were believed to have been planted by retreating Boko Haram criminals. In a similar operation, troops of 153 Task Force Battalion in conjunction with troops of 22 Brigade Garrison, Nigerian  Army Special Forces and elements of Civilian Joint Task Force(CJTF) supported by Air Task Force (ATF) Operation LAFIYA DOLE encountered a pocket of Boko Haram criminals at Kerenoa, Marte LGA of Borno State. The visibly shocked insurgents fled their enclave on sighting the robust advancing troops, abandoning one General Purpose Machine Gun (GPMG) as they scamper in disarray.

In another development, following credible information of suspected cult activities, troops of Operation MESA in Plateau State arrested 4 suspected cultists named Anayo Basil, Dadok Jeremiah, Sani Sale and Miss Mary Effiong at Jos University Teaching Hospital in Jos East LGA of Plateau State. Same troops also raided a suspected drug peddlers’ hideout at Richa Village of Bokkos LGA of Plateau State and arrested one Joe Agai a notorious drug peddler with a large quantity of substance believed to be Cannabis Sativa, a locally fabricated pistol and one live cartridge. Another notorious drug dealer, Benjamin Jumbo was arrested by troops of 146 Battalion (Main) in Bonny Island, Rivers State with a 50 Kg sack containing substance believed to be Cannabis Sativa.  Additionally, a notorious Tarok Militia gang leader, Shehu Jatau and 5 of his accomplices were also trailed and arrested in a hotel at Central Area Abuja. Preliminary investigation revealed that the suspects were very active in the unfortunate Plateau crisis that cause the lives of citizens and destruction of properties worth billions of naira. However, with the return of peace in the state, the criminal gang resorted to kidnapping, extortion and unleashing unprecedented carnage on innocent residents.

Furthermore, troops of 2 Battalion, while on a routine patrol between Polewire and Gayam Villages in Birnin Gwari LGA of Kaduna State,      rescued 7 kidnapped victims from a group of bandits in the early hours of Tuesday 29th October 2019. On sighting the approaching troops, the bandits abandoned their victims and escaped into the nearby forest. However, the rescued victims who were initially travelling from Pandogari in Niger State to Kano were escorted out of the area and continued with their journey. Relatedly, troops of 8 Division, while conducting clearance operation against bandits at Mai Yashi Village of Isah LGA of Sokoto State, rescued 2 kidnapped victims namely Shamsudeen Bisharawa and Sadiq Mustapha from their abductors.

Similarly, troops of 31 Artillery Brigade encountered a group of bandits at Ungwan Shai Community in Wushishi LGA of Niger State who are believed to be terrorising the community.  In a brief fire fight, one of the bandits was neutralized while others are believed to have escaped with gunshot wounds. In a related development, troops of 3 Brigade deployed at Falgore in Tudun Wada LGA of Kano State, acting on credible information conducted a successful Cordon and Search Operation at Tudun Wada which led to the arrest of one of the most wanted kidnappers within the area, Umaru Abubakar Kaduwa operating along the Kano – Kaduna Highway.

AKIN FAKOREDE REPLIES TOWNCRIER.NG “I AM IN THE NORTH ON SPECIAL DUTY”