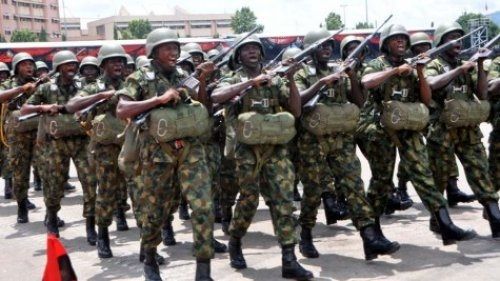 In an effort to stamp out criminal elements in this 2019 ember months which is generally regarded as rush period for get rich quick, the Nigerian Army has step-up operations all over the country. The Media Coordinator of Army Operations Defense Headquarters Abuja,  Colonel Aminu Iliyasu in a Press Release issued out on 1st October, 2019 by his office said that  “Nigerian Army troops in various operational theatres across the Country has  continued to wipe out and frustrate activities of criminal elements. This is in line with the resolve of the Chief of Army Staff (COAS) Lt Gen Tukur Yusuf Buratai to ensure the prevalence of a peaceful and conducive atmosphere for all citizens and residents in the Country as this year’s Ember months.”

He provided more details about the activities of the Nigerian Army between 29th September to 1st October 2019 with much visible result-oriented achievements such as in the coded “Operation LAFIYA DOLE” operating from the North eastern part of Nigeria..

“In operation LAFIYA DOLE Theatre, criminal insurgents met their waterloo when troops of Sector 3 supported by the Air Task Force (ATF) successfully repelled an attack on Gubio in Gubio LGA of Borno State. The gallant troops neutralized 2 of the criminal insurgents and recovered one Gun Truck, 2 AK 47 Rifles, and one Anti Air Craft Gun. Additionally, 51 civilians hitherto held hostage by the criminals were rescued during the encounter. The troops continue to dominate the area with fighting/clearing patrols, ambush, raids as well as cordon and search operations.

“Similarly, troops of the Sector, acting on timely information also arrested 4 male suspects with large consignments of dried fish intended for delivery to the criminal insurgents. All 4 suspects are currently undergoing interrogation where they are giving useful information.”

Continuing Colonel Aminu said the gallant military personnel in another development, recorded great feats as the “troops of 7 Division Garrison in conjunction with their counterparts from 212 Battalion and Nigerian Army Super Camp 4 (NASC) during a clearance operation at Mada Village in Konduga LGA of Borno State arrested a pickup truck conveying 3 adult females, 15 adult males and 3 rustled cows. The claim by the suspects that they were of the Shuwa extraction was refuted by the locals in the area as none of the suspects could speak any of the local languages. Preliminary investigation has revealed that one of the suspects and an NGO operating within the Theatre had been communicating at various times. Investigation further revealed that the suspect is on a WhatsApp chat platform with the same NGO.’

Still in the North Eastern Nigeria axis  troops of 27 Task Force Brigade Garrison having been mobilized  on aggressive patrol indeed  denied criminal insurgents freedom of action within their Area of Responsibility (AOR). The operation resulted in the discovery of two Improvised Explosive Devices (IEDs) planted along the route in Buni Gari, Gujba LGA of Yobe State. The IEDs were safely detonated by the Explosive Ordinance Device (EOD) team in the concerned theater of war zone in North eastern Nigeria.

In another operation code named “Operation MESA” it was revealed that the Nigerian Army troop in their renewed activities has “continued to cover other parts of the Country within the ambit of Operation MESA to ensure the safety and security of the citizens. Troops of 245 Battalion while responding to a distress call, promptly intervened and averted a bloody clash at Mkpani community in Yakuur LGA of Cross River State between the youths of Ajare and Edume clans during a New Yam Festival held in the Community. Items recovered from the scene include 2 Dane guns, one locally made pistol, 2 axes and one cutlass”.

Regarding successful activities of Nigerian Arrmy In the South west area of Nigeria, Colonel Iliyasu said “the Nigerian Army troops of 9 Brigade Garrison while on a joint patrol with personnel of the Nigeria Police Ejigbo Division in Suru-Lere LGA of Lagos State discovered an abandoned AK 47 Rifle with Registration Number 562558860 inside a drainage in the general area of Ejigbo. The recovered weapon has since been handed over to Nigeria Police Ejigbo Division for further action.

“In the light of the daunting security challenges facing the country, the Chief of Army Staff-COAS, Lt Gen Tukur Yusuf Buratai wishes to reassure the good citizens of our country of the unwavering resolve of the NA to safeguard the territorial integrity of our country in aid of civil authority. The Nigeria Army hereby requests our good and law-abiding citizens to go about their normal economic activities without fear of molestation. The populace is equally requested to please assist the Nigerian Army with any useful information that will assist in our operational efforts aimed at ridding the society of criminal elements and other miscreants.”

In Nigeria the Ember months have been regarded as rush periods by criminal minded elements who want to live large beyond their economic capacity in order to impress their peers and well-wishes as the return to their various rural homes during festive periods including the Yuletide.