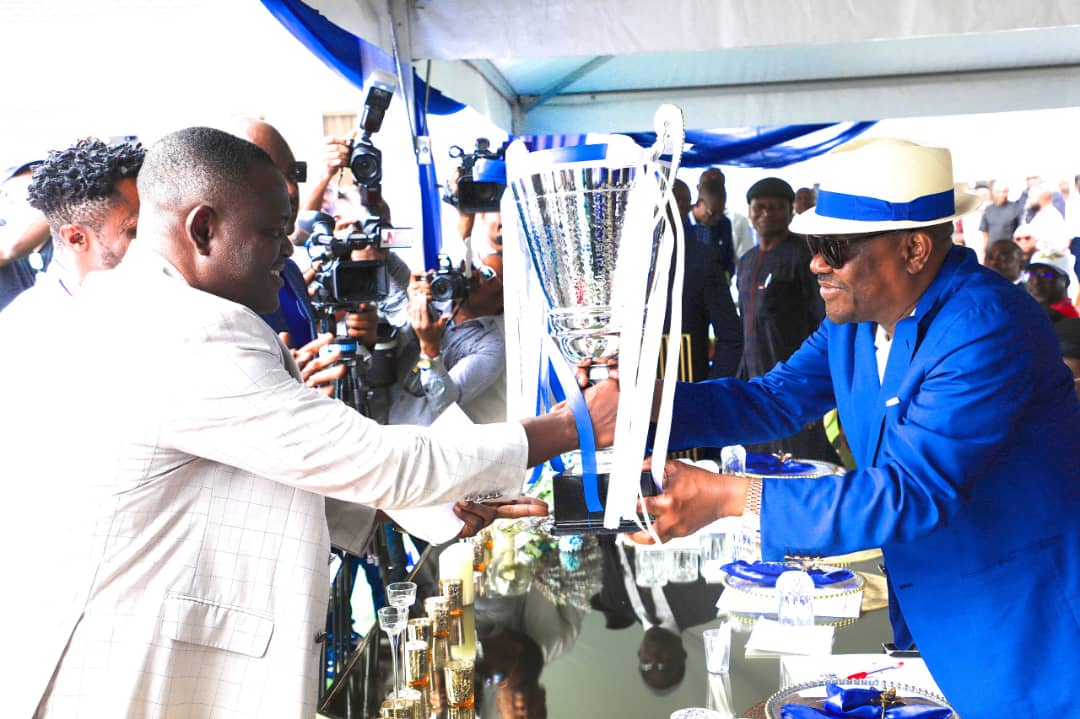 Members of the Rivers United Football Club, their coach and management have also been conferred with the State’s prestigious ‘Governor’s Medal Service Award’.

During a colourful reception held at the Government House, Port Harcourt on Thursday, Governor Wike, who acknowledged the team’s sacrifice, determination and hard work throughout the 2021/2022 league season, rewarded each player with $20,000.

Governor Wike, has meanwhile directed the Commissioner of Sports, Chris Green, to arrange for a two weeks training session for Rivers United team in Madrid, Spain.

The governor explained that the government and people of Rivers State are delighted that Rivers United won the coveted NPFL trophy.

“I am not surprised because I saw your dedication and commitment and I knew that he who works hard, God will always give him the support to emerge victorious.”

Governor Wike urged Rivers United players to strive to be physically and psychologically prepared in order to excel during the Confederation of African Football competition next season.

“You need to be prepared psychologically in order to face other competitors. We are talking about Africa, not West Africa. So, you have such huge task. You must be prepared in order to achieve. And so, on our own as government, government must do everything humanly possible to encourage you.”

Speaking at the occasion, the Rivers State Commissioner of Sports, Chris Green, explained that Rivers United did not only win league season in style, they broke all the records.

Green, who attributed Rivers United victory to governor’s immense support, said the club had the first and third highest goal scorers, best coach and goalkeeper in the league.

“Rivers United conceded the least number of goals in the league. Rivers United won the highest number of victories outside Port Harcourt, that is in away games. All are the handiwork of Stanley Eguman (coach), these golden boys and your direction and mentorship. Your excellency, we want to let you know that this is just the beginning. Our best is yet to come.”

Similarly, Rivers United coach, Stanley Eguma, explained that the club’s victory was not achieved on a platter of gold.

He commended the governor for his unrelenting support to club, and assured him of their preparedness to dominate the African continent in next season.

“We have conquered Nigeria, it is our target now to go to Africa and also do same. I want to assure your Excellency that with your able backing and with your support, we are not going to let you down. We have gone to Africa in the past but never made it. But this time around with the structure we have and with the cooperation we have in our team, I am assuring you that we are going to succeed and bring the trophy to your table.”

Rivers United captain, Festus Austin lauded Governor Wike for his support and assured him that the club will make him, the State and Nigeria proud during the CAF competition next season.