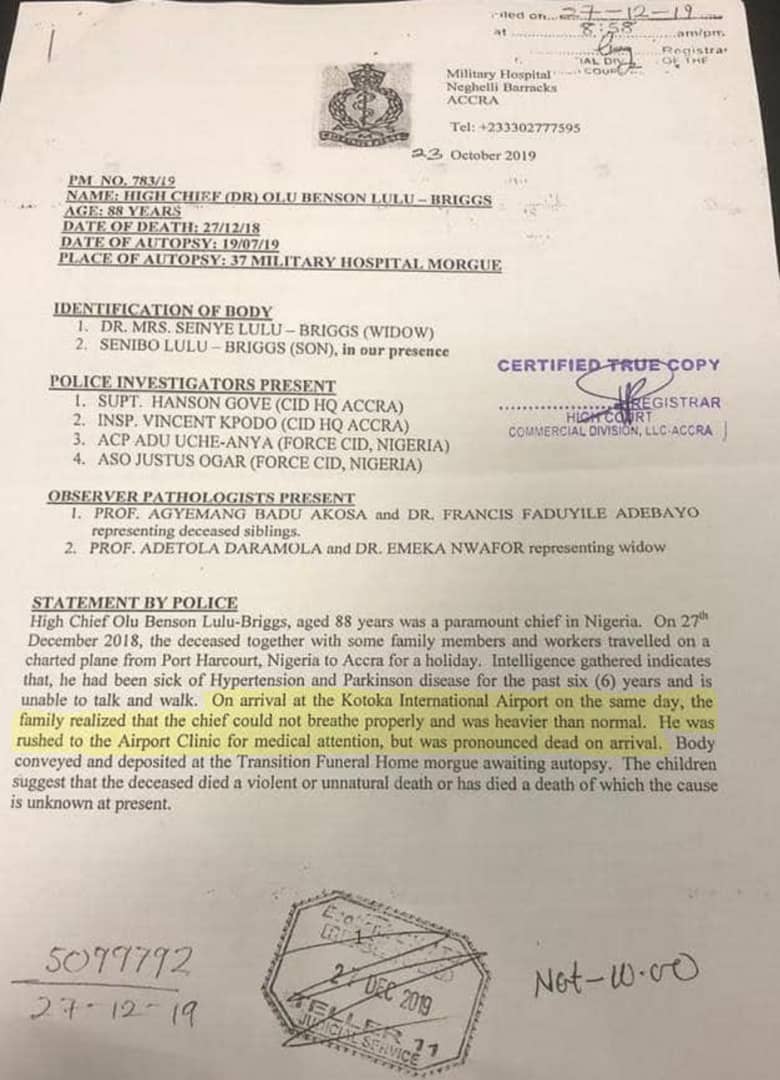 “On arrival at the Kotoka International Airport on the same day, the family realized that the chief could not breathe properly and was heavier than normal. He was rushed to the airport clinic for medical attention, but was pronounced dead on arrival”

“DEAD ON ARRIVAL”. In spite of all the efforts to hijack the autopsy and tailor its report to preconceived conclusions, the report nevertheless states unequivocally that High Chief O.B. Lulu-Briggs was brought into the Ghana Airport clinic dead.

While they laboured to explain what killed the 88 years old Kalabari War Canoe Chief, they inadvertently answered the most important question: WHERE AND WHEN DID HIGH CHIEF O.B. LULU-BRIGGS DIE?

The autopsy report says that the High Chief was “dead on arrival ” which means he died before he got to Accra because the airport clinic is less than a two-minute drive from the tarmac.

The position of Chief Dumo Lulu-Briggs all along has been that, considering these intervening events:

Based on the above, he, Chief Dumo Lulu-Briggs, had reasonable cause to suspect that his father, High Chief O.B. Lulu-Briggs may have died in Port Harcourt and his corpse may have been smuggled to Ghana by his wife, Mrs. Seinye Lulu-Briggs.

This suspicion was aggravated by the blunt refusal of Mrs. Seinye Lulu-Briggs to release the body, the medical death certificate and mortuary receipts to him, Chief Dumo Lulu-Briggs who is the head of the Lulu-Briggs family and Chief mourner.

That Mrs. Seinye Lulu-Briggs, knowing that if she had alerted the family about her husband’s demise while still in Port Harcourt, it would have been practically impossible for her to take possession of her husband’s mortal remains, medical death certificate and mortuary receipts. Therefore she may have smuggled her already dead or dying husband to Ghana to evade family intervention.

This was the basis for the petition to the Inspector General of Nigeria Police to investigate the circumstances surrounding the death of High Chief. O.B. Lulu-Briggs.

It is to investigate when and where the High Chief died, not what killed the 88 years old man.

The autopsy, although conducted in total contravention of the police directives and the Court order, states clearly in its introduction that High Chief O.B. Lulu-Briggs was brought in dead into Accra.

Characteristically, Mrs. Seinye Lulu-Briggs is all over the media, brandishing the autopsy report, spending huge sums on national television, claiming that the autopsy report exonerated her of killing her husband. But she keeps sealed lips on the startling revelation that she brought her husband “dead on arrival” at the Kotoka International Airport.

Seinye Lulu-Briggs is also quiet on the Coroner’s order of September 6, 2019 for an inquest into the death of her husband which she failed to truncate when the Ghana Supreme Court on Tuesday, 11th February, 2020 threw out her application against the orders of the Coroner.

SEINYE LULU-BRIGGS: THIS WOMAN IS IMPOSSIBLE; SHE GOES TO COURT AGAIN!

DUMO’S INQUEST: A DEFEATIST VOYAGE OF MISCHIEF, MISERY AND DESPERATION